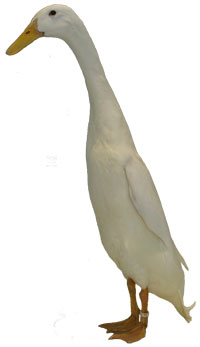 Commercially, ducks have been bred for their meat, down, foie gras and eggs, and this history has contributed to the domestic breeds of duck we still have today. I have tried to capture their history in the linked breed profile pages and have consulted and collaborated with many breed experts. The photos of these duck breeds mainly come from poultry and waterfowl shows in the UK that I have attended over the last 12 years.

Keep in mind that not all white ducks you see are Aylesbury’s, just as not every white goose is an Embden! Many commercial crosses have been created because of the demand for fast-growing table ducks. Therefore, many ‘white ducks’ that you see on farms and smallholdings aren’t pure breeds.

From heavy duck breeds like the Aylesbury or Rouen to the ‘bowling pin’ Indian Runner or the tiny but noisy little Call duck, there’s usually a breed of duck that will tickle your fancy.

Click on the breed below to go to the breed page.

The A-Z of Domestic Ducks

What is the difference between a breed and a species ?

A species is a group of animals that can interbreed and produce fertile offspring. This occurs through natural selection. There are different species of ducks found in the wild (wildfowl) and by specialist breeders in captivity (ornamental ducks or ornamental wildfowl).

A breed is a domesticated subset of a species. It is used to describe domestic animals that have been artificially bred for specific qualities and characteristics for several generations until they breed true. For example, the Indian Runner and Pekin are breeds of duck descended from the Mallard (Anas p. platyrhynchos).

Since all of our domestic duck breeds (except the Muscovy) are descended from the same species (the Mallard), they can interbreed with one another and any wild Mallards that fly into the breeding pen!

We can see an example of this interbreeding on many lakes and ponds worldwide, where domestic ducks have been released and bred with the local Mallard population.

This page covers every domestic duck breed in the British Waterfowl Standard (and British Poultry Standard). It does not cover wildfowl.

How many different species of ducks are there in the world?

There are a staggering 162 species of ducks, geese and swans in the wild today. Ducks are classified under the Anseriformes family and range dramatically from small teals to geese and swans.

Which species do domestic ducks belong to?

Out of the 162 wild species of ducks, geese and swans, just two of them have been used to create the domestic duck breeds we have today: the Muscovy (Cairina moschata) and the Mallard (Anas platyrhynchos) shown here.

The Mallard is commonly seen in the wild on lakes and rivers in the cooler regions of the northern hemisphere is accepted as being the ancestor of all except one of our domestic duck breeds (the Muscovy).

Domestic ducks have been selected for specific looks, behaviour, colours or qualities over many generations but the large Aylesbury or the tiny Call duck are all the same species as the wild Mallard.

What breed standards are there for duck breeds?

There are four breed standards for ducks in the world:

These breed pages are based on British breed standards, although others are usually similar.
What classes are there for ducks? 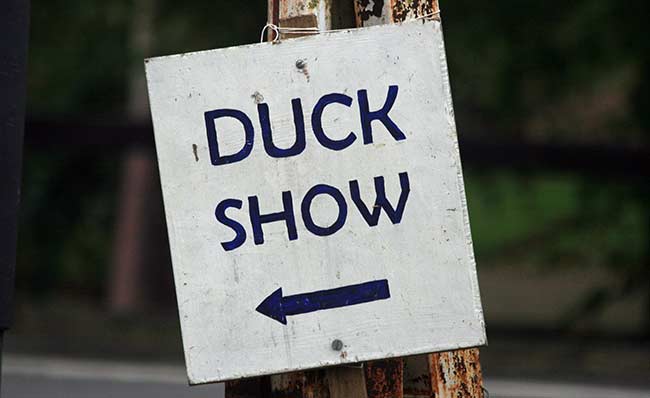 The British Waterfowl Association Standards (and the Poultry Club of Great Britain Poultry Standards which adopted these) has five classes:

Meanwhile, over the pond (sorry, couldn’t resist), the American Poultry Association (APA) has four classes based on size:

Besides my own photos, I have to give an extra special thank you to Rupert Stephenson, poultry photographer who has worked with me to capture some of the pictures for this duck breeds guide. Most importantly, I would also like to thank the British Waterfowl Association and Poultry Club of Great Britain for allowing Rupert and I to photograph their ducks at various poultry and waterfowl shows over the years.

Images are Copyright
Please do not use these images without permission.