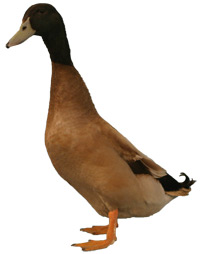 Uses: Utility: meat and eggs.
Eggs: 250 to 300+ Eggs.
Origin: Uley, Gloucestershire, U.K.
Weight: Drake: 2.3 – 2.5 Kg, Duck: 2 -2.3 Kg.
Classification: Light.
Colours: Khaki, Dark and White.
Useful to Know: The most influential and successful of all the ducks for their superb laying ability. A very popular duck for smallholders wanting eggs and as an all round utility duck. Dark Campbells are sex-linked as day olds.
Photo: A Khaki Campbell Drake.

The Campbell duck originates from Uley in Gloucestershire. It was created by Mrs Adele Campbell who aimed to produce a fast maturing dual purpose utility duck for laying eggs and having good table qualities. She crossed a Rouen drake with a Fawn and White Indian Runner duck that was said (Lewis Wright’s Poultry) to have been an individual duck “which exhibited the most remarkable laying powers” and in a letter from Mrs. Campbell herself to The Poultry World in 1901 says the Indian Runner laid 195 eggs in 197 days. She says “The original Campbells were practically this cross, except one season a Mallard drake was used.”

The wild Mallard was thought to have been used to improve the taste of the meat. She produced ducks that were laying averages of greater than 200 eggs per year. Lewis Wright says they were “probably something of a Rouen colour, since the original Campbells are somewhat like Rouens in appearance, but much lighter” and goes on to say “…the drakes have grey backs and a pale claret breast, the legs yellow.”

Mrs Campbell had created a utility duck that had become very popular but soon William Cook was to release his Buff Orpingtons and the Buff colour became the rage so she tried to create a Buff coloured Campbell but as she says in her letter to The Poultry World “…and I thought of getting Buff too but failed. They would come khaki. Just then the South African War was on, so I suppose it was patriotism. The foundation of the Khaki Campbells was the original Campbell mated again to fawn and white Indian Runners.”

The Khaki Campbell although announced in 1901 was only standardised some years later in 1926. A White variety of Campbell was also developed by Captain F.S. Pardoe in 1924 and admitted to the standard in 1954. The White Campbell produced a more attractive carcass for the table that could be more readily sold. The Dark Campbell was also standardised in 1954 and was created by Mr. H. Humphreys of Devon some years before this to create a duck that is sex-linked when crossed with a Khaki drake, producing Khaki Campbell ducks and dark looking males that can be sexed from these down colours as day old ducklings.

Khaki Campbell Duck. Copyright The Rice Collection. Taken between 1920 and 1940.

Khaki Campbell Drake. Copyright The Rice Collection. Taken between 1920 and 1940.

A pair of Dark Campbell ducks.

White Campbells owned by Sue and Geoff Chase. The bills should ideally be orange, the same as the feet / webs.