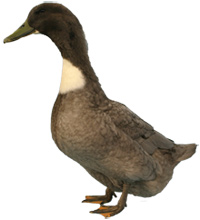 The Blue Swedish duck is called ‘Svensk Blå Anka’ in Swedish. It originates from the Baltic shores of Pomerania, Sweden (now part of modern Germany and Poland) where it was bred as a slow maturing, heavy meat breed. There were a number of blue ducks emerging from the North of Europe in the 19th Century, but two were more popular than the others, the Blue Swedish and the Pomeranian. To confuse matters, both have white bibs but the Blue Swedish has some white primary feathers.

The Blue Swedish entered the British Standards in 1982, classified as a heavy breed, but was admitted to the American Standard of perfection much earlier in 1904 as a medium class duck. According to both American and British Standards, Blue Swedish should always have a white bib, and colours other than blue in the feathers should be avoided. Blue in the bill is preferred to green in the drake and slate blue in the duck. Yellow bills should be avoided and the American Standard of Perfection states that a yellow bill is a disqualification.

Blue isn’t a true colour but a dilution of black (heterozygosity in a color gene). A blue duck to blue drake mating will produce 50% blue, 25% black and 25% splash offspring on average.

There aren’t many breeders of Blue Swedish ducks in the U.K. they are in desperate need of more people taking up the breed.

One Response to "Blue Swedish Ducks"