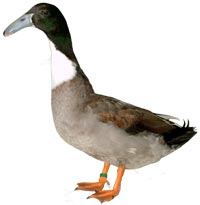 Hookbill ducks are quirky looking ducks. They have an elongated bill that curves downwards, at the end making them look quite different to other breeds of domestic duck. The hook bill duck has a history of more than 400 years, making them the oldest Domestic Waterfowl breed in Europe.

Even Charles Darwin described hook bills in his books and kept them in his backyard pond. The origins of the Hook Bill is uncertain. Old texts suggest they originated in Asia but they were developed further and kept extensively in Holland at one point on the canals where they were let out (and would fly off) to feed and would come back home at night, being shut in and providing their keepers with eggs the next morning.

One story is that the white-bibbed Hook Bill was bred to help hunters identify them from wild Mallards that they would shoot. I haven’t yet found any old texts that back this story up though.

Hook Bills are terribly underrated in the poultry keeping world and for some reason, they are not very popular. They are good layers of blue eggs, they tame very easily, are quiet compared to some other breeds and are inquisitive. In Chris and Mike Ashton’s book “Keeping Ducks and Geese” they say young ducks have been known to form a circle around visiting humans and tug at shoe-laces. 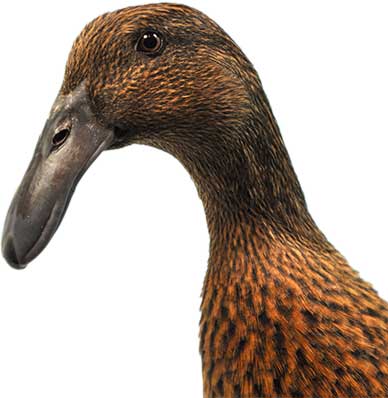 Hook Bill ducks were first admitted to the British Waterfowl Standards in 1997. They were imported into North America by David Holderread in 2000 and are not yet admitted to the American Standard of perfection. Hook Bills are generally called ‘Dutch Hookbill’ in America, ‘Krummschnabelenten’ in Germany, ‘Olandese Bec Courbe’ in France and ‘Noord Hollandse Krombekeend’ in Holland where ‘Noord Hollandse’ comes from the province where they were originally kept. Dusky Blue, Bibbed Dusky Blue, ‘Dirty White’ (non-standard colours in the UK) can be found in Holland and Germany.

There are no known breed clubs for the Hook Bill, however, in an effort to preserve this breed, the Hook Billed Ducks Program has been set up. The Hook Bill is now an endangered rare breed and it is thought that many colours have already been lost Black, Black-bibbed, Yellow, Apricot, Blue, Grey, White with Black, Mallard). Based in Holland, this organisation aims to keep a register of breeders, blood lines, varieties and remaining numbers.

German and Dutch breeders are looking for new blood lines from the UK, especially for the white variety (which may not exist in the UK anymore?). The curator of this program is Mariano Zamorano. He can be contacted by email: info@zoonimal.org or by telephone: (Holland) +31 6400 14 103.