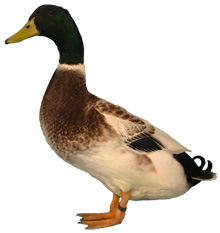 The Abacot Ranger (also known as the Hooded Range in America, Streicherente in Germany and Eastern Europe and Le Canard Streicher in France) was created in Colchester in the County of Essex, U.K. from 1917 to 1922 by Oscar Gray of Abacot Duck Ranch. He used sports from Khaki Campbells and a White Indian Runner Drake to create the breed.

They were a popular utility duck supplying meat and eggs but became less popular in the UK and if it wasn’t for the work done in Germany by H. Lieker who stabilised the colour, they could have possibly been lost.
The British Waterfowl Association standardised these ducks in 1987. They are a light duck that rarely flies so can be kept in using a fairly low fence within the garden assuming the garden is safe from predators like foxes.

The European Streicherente are slightly smaller when compared with the U.K. Abacots. Many of the original U.K bloodlines are thought to have been spoilt by outcrosses during the 1960’s to Whalesbury hybrids, a popular hybrid at that time created by Captain Leslie Bonnet. The Whalesbury drakes looked similar to the Abacot drake so were easily confused and yellow-coloured bills and the wrong coloured webs still appear in many strains to this day.

There hasn’t been much interest in the Abacot Ranger by many of the bigger waterfowl breeders but there are pockets of breeders in the U.K reviving the breed using German bloodlines and over the last few years, the numbers appearing at shows is increasing.

Abacot Rangers are reasonable egg layers. They lay a fairly large white egg (about the size of an Indian Runner egg) weighing between 60 and 70g. Good utility strains lay around 180 to 200 eggs per year. During the 1922 egg laying trials at Wye College, they achieved from 4 ducks an average of 233.75 eggs per duck and came first in the trials.

Abacot Rangers look similar to Campbell ducks but are a bigger build so can be useful for the table. The live weight of a duck is around 2.5 kg and the drake 3 kg.

A friendly duck that can become quite tame. Plumage changes colour between nuptual during the breeding season and the more ‘camouflage’ eclipse at other times.

Abacot Ranger Drake. A little too light on the the secondary upper coverts.

An Abacot Ranger Duck that got a First at the BWA National 2014.

A Flock of Abacot Ranger Ducks Owned by Tim Daniels.