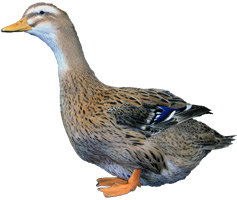 The Rouen Clair duck has a slightly foggy history but appears to originate from the Picardy region to the north of Paris around 1920. It was created from the Rouen duck which itself was created in the Rouen area, slightly to the west of Picardy 50 years earlier in the 1860’s, mainly as a commercial duck. Feathered World Magazine in 1933 had an article from van Gink who said it was Monsieur Rene Garry who produced them by crossing and careful selection, selecting ducks with a lighter ground colour from the farms in the region. What went into the end result is unknown but van Gink went on to say he felt they had Pekin blood in them due to the shape of the head, which was unknown in Europe before the Pekin arrived.