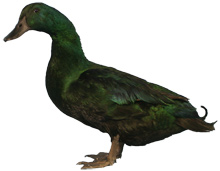 Uses: Exhibition, Utility: meat.
Eggs: 80 to 160 Eggs.
Origin: America.
Weight: Drake: 3.6 Kg, Duck: 3.2 Kg.
Classification: Heavy.
Useful to Know: The female will get some patches of white on her feathers in her second and subsequent years.
Photo: A Cayuga Drake.

The Cayuga duck originates from near Lake Cayuga in the Finger Lakes region of New York. The first imports from America were said (Lewis Wright’s Poultry 1873) to arrive in 1871, from a Mr. W. Simpson and imported by a Mr. J.K Fowler. They were said to be rather small specimens and thought to have been crossed with the Black East Indian to achieve the green sheen that is seen when the light is right to give an almost iridescent colouring. To improve on size, Lewis Wright says they “…were afterwards crossed, by some with Aylesbury and by others with Rouen to get size.” The type was altered sufficiently for the birds to look more like the Aylesbury and early paintings by the famous poultry artist Ludlow confirm this Aylesbury ‘look-alike’. Lewis Wright goes on to say that “…original birds had no keels while the modern English exhibition Cayuga has this feature very pronounced.“

Other imports to England occurred from the Simpson stock, The Domestic Duck by C&M Ashton mentions a Mr. Braikenridge of Chew Magna in Somerset.

Modern day Cayugas don’t have the size or the keel that early paintings show (see the black and white image below from the Rice Collection, taken between the 1920’s and 1940’s). The green brilliance has been improved over the years although a frequent complaint is they are not heavy enough! The American and British Cayugas look very similar in appearance.

The Cayuga duck was standardised in America in 1874 and later in Britain in 1901.

The Cayuga is a stunning duck to keep, mainly due to the lustrous beetle green sheen that reflects sunlight at certain angles making it look almost iridescent. They have dark brown eyes and a black bill and feet and are an attractive duck to have in the garden. They are relatively rare and keeping a small flock of Cayugas helps to preserve the breed. As other black ducks, the female will get some patches of white on her feathers in her second and subsequent years. You can read more about this in White Patches on Ducks With Extended Black Genes.

A pair of Cuyuga Ducks. Photo courtesy of Rupert Stephenson.

The following books are available. Links take you to the Amazon or other sellers’ pages.

One Response to "Cayuga Ducks"