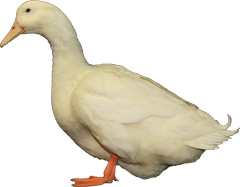 The Aylesbury duck originates from the early 18th Century from the town of Aylesbury in Buckinghamshire, England where it became a profitable cottage industry supplying the demands of London’s Markets. Originally called ‘White English’ until 1815 where they were known as Aylesbury Ducks. The most popular area in Aylesbury where the ducks were reared (and also one of the poorest) became known as ‘Duck End’. The ducks often lived inside the cottages of their owners, which made conditions particularly unsanitary.

The Aylesbury was popular for its meat as a table duck in the capital due to its white carcass. The feathers of the Aylesbury were used extensively in quilts and bedding. White ducks were preferred by most people. The ducks were walked to the London markets about 40 miles (64 km) south, a difficult job in itself!

The feet of the birds were protected before leaving by driving the ducks across a ditch filled with a cold tar solution which made their feet sticky, then they were walked through sawdust which stuck to the tar on their feet. They would stop overnight at inns which provided enclosures in their yards for the cost of a few birds. In 1839 the Cheddington to Aylesbury railway line made transport easier and the trade flourished.

Originally, it was thought that the Aylesbury Duck could only be raised in the region as there was an ample supply of white gravel in the river Thame and other small streams. The belief was that the ducks dug their bills into this and the birds bill and flesh was lightened to the colour that was so sought after.

It was soon discovered that they could be raised without this and many of the ducks were raised without ever swimming on water. It was the beginning of the 19th century that duck rearing in the town began to decline. Larger duck rearing industries started to supply the city and the Pekin duck that was introduced in 1873 had been bred specifically for eggs and meat which helped diminish the popularity of the Aylesbury. By the Second World War, Duck rearing in Aylesbury had almost disappeared completely.

An Aylesbury Drake from – Photograph Copyright The Rice Collection. Taken Circa 1920-40 by the late Mr Arthur Rice.

A flock of Aylesbury ducks kept in Aylesbury towards the end of the 18th Century.

Aylesbury Drake from the early 1990’s. Photo courtesy of the BWA.

One Response to "Aylesbury Ducks"