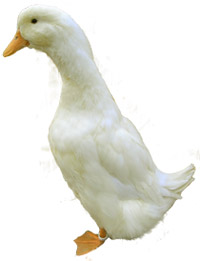 Uses: Utility: meat.
Eggs: 60 to 140 White Eggs.
Origin: China.
Weight: Drake: 4.1 Kg, Duck: 3.6 Kg.
Classification: Heavy.
Useful to Know: Feathering is fairly soft so avoid too much mud. One of the most influential breeds in the commercial market for producing meat for the table.
Photo: A Pekin Duck showing the upright stance found on Pekins in Europe. Plumage should ideally be cream (white is classed as a minor defect)

The Pekin duck is most famous for its commercial use, appearing on Chinese food menus around the World. Most of the meat produced in the UK is in fact from a hybrid cross with Aylesbury ducks. These birds are often used because they produce a high quality tender meat by about 8 weeks of age. In the U.S the Pekin is sometimes called the ‘Long Island Duck’ since the first imports into America in 1873 arrived at Long Island, New York.

The majority of duck eaten in the US is Pekin Duck. The Pekin first appeared in the UK during the 1870’s and was imported from China and like all domestic ducks (with the exception of the Muscovy) is a descendant of the Wild Mallard.

Both bill and legs / webs are bright orange. The feathers are cream in colour. European Pekins have an upright carriage, almost like a penguin, however, the standard for the Pekin does vary between countries. The American Pekin is not as upright as the European Pekin. Most of the Pekins found in the UK today have German origins where they have been imported by breeders over the last 100 years or so.

The Pekin entered the British Poultry Standards in 1901 and the American Standard of Perfection in 1874.

Pekin Duck. Photo taken between 1920 and 1940. Photo is copyright and courtesy of the Rice Collection.

A German Pekin Duck at the Hanover show.