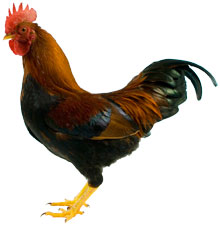 Uses: Dual purpose utility – meat and eggs.
Origin: Welsum, Holland. Eggs: 200 – 250 red-brown.
Weight: Cock: 3.2 Kg.Hen: 2.7 Kg.
Bantam Cock: 1.02 Kg, Hen: 790 g.
Colours: Red-Partridge, Silver Duckwing (Standardised UK), Silver, Golden (both rare and only exist in Germany).
Useful to Know: UK Standard has not been revised since 1932. Some details are not achievable, such as ‘upright’. The back should be long and flat, almost horizontal. Crele Welsummers are standardised as The Welbar.
Photo: Red partridge Welsummer male.

The Welsummer chicken gets its name from the village of Welsum near the town of Deventer in the Netherlands where they were slowly created in the farms and surrounding villages from 1880 onwards. Birds were from assorted origins and were selected for their large dark brown eggs over their looks. It is thought that the Brahma, Cochin, Malay, the dark brown egg laying Croad Langshan and later, the Rhode Island Red and Brown Leghorn is in the make up of these birds.

The launch of the first Welsummers that consistently bred true to type took place in 1921 in The Hague at the World Poultry Congress. They reached England in 1927. An outline breed standard was first published around 1923 but a more detailed standard was produced in England in 1929 with a further refinement in 1932.

Bantam Welsummers were created in Germany and England (separately) during the 1930’s. They are very popular abroad but there is a limited number of breeders interested in them in the UK.

Large Welsummers are one of the most popular breeds and strangely are classified as a light breed by the Poultry Club of Great Britain, despite being heavier than say Marans or Barnevelders that are classed as heavy breeds. This classification is thought to have occurred because the original birds that were imported into the UK were lighter than the birds of today.

In Europe, the name of this breed is spelt ‘Welsumer’ with only one ‘m’ but in the UK and America, the spelling used is ‘Welsummer’, which probably came about because of misspellings by the English.

One Response to "Welsummer Chickens"