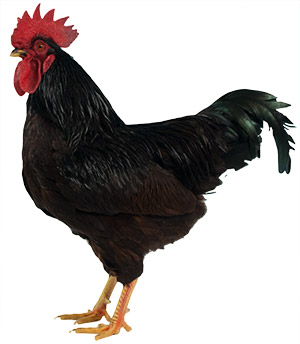 Rhode Island Red chickens (or RIR as they are often called for short) were developed in the early 1890’s and have often been described as ‘bricks’ due to their rectangular shape. Rhode Island Red chickens reached the UK in 1903 when Sidney Risdon brought some eggs back to Somerset. They are one of the most well-known around the World due to their use in hybrid hen production.

Originally, the Rhode Island Red was created as a dual purpose utility bird but their use in hybrid layer production far outweighs their popularity as a meat bird.

Rhode Island Red hens will lay a good number of large light brown eggs which has made them the most popular choice in the UK and Europe to use in hybrid crosses for commercial egg production.

North American consumers favour white eggs so most of their hybrid hens are Leghorn based.

Rhode Island Red hens are generally very placid and easily tamed, but some strains of the male can be quite aggressive. If more than one cockerel is kept, they are better in a free range environment where they have plenty of space.

The Rhode Island Red entered the American Standard of perfection in 1904 and the British Poultry Standards in 1909.

Rhode Island Reds (genetically ‘gold’ plumage) are used to create sex-linked hybrid layers, crossing with genetically ‘silver’ hens like the White Wyandotte or Light Sussex. Chicks from such a cross can be identified at a day old by the colour of their plumage.

You can read about Gold and Silver Sex Linkage here in our Breeding / Genetics section.