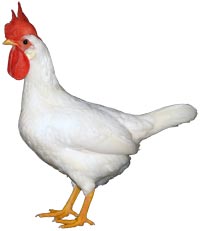 Leghorn chickens originate from Italy, being sent to America around 1830. It is quite often thought of as an American bird since it was refined and perfected into a stable breed in the United States before being shipped back to Europe. It arrived in the UK in 1869. White Leghorns have been the main Egg producers in North America, as the American marketplace has demanded white eggs and has been used extensively in Battery cage systems over there.

Commercial strains of white Leghorns can be very good egg layers, laying around 250 or more eggs per year. Show strains will lay far less than this though. Even though Leghorns started off as the same birds in the US and UK back in the 1870’s, and there were many shipments to and from America of different colour varieties and gradually over time, they went in opposite directions according to the fashions of the time. 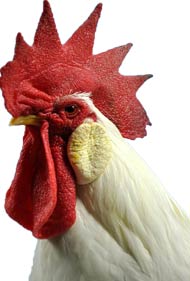 The British went for bigger birds, larger combs and lobes with tight tails and the Americans went for exactly the opposite. By the end of the first World War, the shipments stopped as they were of no use to one another. Leghorns effectively became two different breeds maintaining the same name. Today, the breeds still maintain these differences and it is clear to see the differences when looking at photos of the Leghorn in American and British written books.

In Germany, Leghorns are called Italieners and in Holland, they are called Leghorns. The standards are very similar there and are very close to the original birds that came from Italy with the exception of a few features. These European birds look far more like the Utility type Leghorns that you find in the UK.

Head of white Leghorn male owned by I. & C. Mills.

One Response to "Leghorn Chickens"