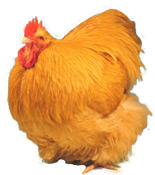 The Orpington was originally created in 1886 by William Cook in the village of Orpington in Kent, UK as a dual-purpose utility breed but its popularity as a show bird has removed many of these original utility traits. Over the years they were thought to have been out-crossed to other breeds to increase the amount of feathering that make them look distinctively large. The large size and docile nature of the Orpington has made them a very popular bird to keep. They were even kept and shown by the Queen Mother when she was alive. 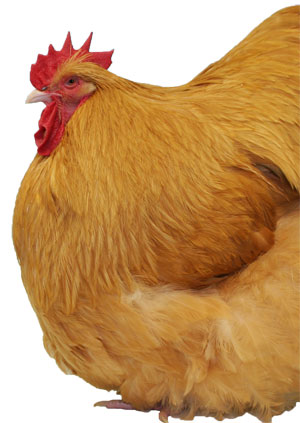 There are 4 standardised colours in the UK (Black, Buff, Blue and White) the Buff Orpington is one of the most popular varieties, the Blue and Black Orpington are the largest. They are heavy birds and carry a lot of fluffy feathering. The show strains have feathering that covers their legs, almost to their feet. There are still some utility Orpingtons around that look distinctively different (see photos of Buff Orpingtons for an example) but it is very hard to find strains that will lay more than about 160 eggs per year. These days, White Orpingtons are usually the best layers, some good strains laying up to 200 eggs per year. Orpington Hens usually go broody easily and make very good mothers.

Some exhibition males require their feathers trimming in order to allow successful mating.