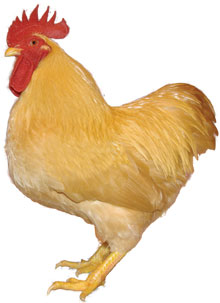 Plymouth Rock chickens are available in a relatively small number of colours but by far the most well known is the (utility) barred Plymouth Rock that has been used commercially in Sex-Linked Hybrid Crosses that allow the chicks to be sexed at a day old. The most famous of these in the UK is the Black Rock hybrid. Barred Plymouth Rock chickens are often described as a larger version of the Dominique chicken and were created during the 1860’s. They are named after the “Plymouth Rock” a large granite boulder off the shore of Plymouth Bay, Massachusetts.

The Plymouth Rock first reached the UK in 1870 and there were many exchanges of birds in both directions across the Atlantic up until the early 1900’s. After this time, as with many other breeds, the UK and US fanciers were working in different directions and the standards for the breed in the two countries were so different, there was no point in further exchanges as they were effectively two separate breeds.

Plymouth Rocks are standardised in the UK, US and Europe. In the US, they are one of the most popular dual purpose utility breeds that mature early and are generally have a placid temperament. They also exist in a bantam size.

Partridge and Silver Pencilled Plymouth Rock require double mating to achieve the correct colours as is done with some Wyandottes.