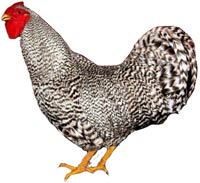 Dominique chickens are one of the oldest recorded American breeds and one of the first to become established in the country. They first appeared in print in the early 1820’s but were probably around even earlier than this, with the Dominique Club of America saying they were well-known in the United States in 1750 although we have not found evidence of this yet.

There were four breeders exhibiting Dominiques at the first poultry show that was held in Boston, Massachusetts in November 1849. Dominiques were a very popular breed until other imported breeds started to become more fashionable with farms and breeders. There was added confusion between the Dominique and the Barred Plymouth Rock which was being shown in large numbers in the early 1900’s and by the 1950’s the breed was almost extinct in the US. The breed owes its survival to a handful of extremely dedicated breeders who brought the breed back to life.

Whilst it is unclear of their exact origins, some authors of early books on poultry speculate that the birds were from Dominica, brought to America by French settlers however there are many other theories on how they got their name and where they originated since the name “Dominiker” was often used to describe the barred pattern, not just the breed.

The Dominique reached Germany in 1880 where it is called ‘Dominikaner’. These birds are distinctly different to the old American breed as (according to Rare Poultry Breeds by D. Scrivener) the Germans wanted a smaller bird with longer fanned tails and tighter feathers to distinguish them from Barred Wyandottes which were created from a Dominique cross in Germany.

Whilst the breed has survived well in Germany, their Standard is of course different to the American standard. 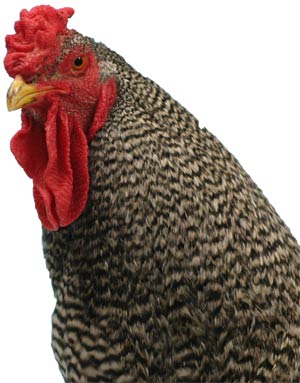 In the UK, Dominique chickens first arrived in 1870 at the Birmingham show where a pen of birds were sold. Further importations took place soon after and the great poultry author Lewis Wright wrote about the abilities of these later imports in 1872 saying these birds were superior to Scotch Grey and Cuckoo Dorking in laying qualities and hardiness but their yellow legs were against it as a market fowl. He went on to praise it as “..one of the most generally useful ‘all round’ fowls we know,”  It is interesting to note that he says “…and we hear from our many American correspondents that it would have been far easier to procure first class specimens ten years ago than now, many of the old strains having been allowed to become crossed and tainted in blood.”  and comments about the colours of offspring from the imported breeds and careless breeding.

The breed was lost from the UK (date unknown) and was re-imported from America in 1984 and later from Germany. The UK standard is very similar to the American Standard of Perfection. There are currently very few Dominique chickens in the UK and need all the help they can get if they are to survive.

One Response to "Dominique Chickens"