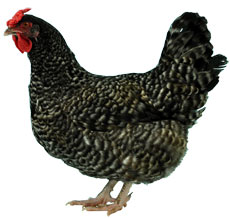 Dorking chickens are one of the oldest English breeds of chicken, named after the town of Dorking in England. It is distinctive having an extra hind toe. Birds with this extra / fifth toe were mentioned in many historical texts, even as far back as Roman times. A Roman writer mentioned birds with five toes in AD47 that were found in England by the Romans but it wasn’t until after the 1850’s in Surrey, Kent and Sussex that the plumage patterns began to stabilise, most probably thanks to farmers who wanted to deter chicken thieves, making their own colour of birds recognisable. 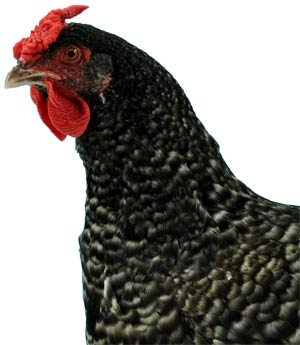 Dorkings, were a popular table bird but also became a popular exhibition bird up until the First World War. By the end of the Second World War, their popularity had declined and it is thought that only a handful of breeders remained. As their show qualities were improved, so their table qualities were lost. During this period, farmers were switching to hybrid crosses that were faster growing and offered better returns.

Dorking chickens remain hard to find. Whilst it also exists in a bantam version, breeders are few and far between. The breed is in desperate need of more serious breeders to increase their numbers.

Dorkings are fairly calm and docile, are good foragers and don’t tend to scratch as much as other breeds. Hens go broody easily and make good mothers. Males have large combs – care should be taken in cold weather to prevent combs freezing.

Most Dorkings do not reach the British Poultry Standards ‘ideal’ weight. Birds should be selected for increased size when possible.