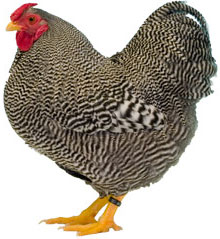 The Wyandotte Chicken originated in the Eastern United States of America. It is thought that several breeders were trying to create an attractive Silver Laced large fowl that was a good utility bird. After some attempts to standardise their individual creations, all of which were slightly different, common ground was eventually found between the breeders and a provisional standard was drawn up. The first Silver Laced Wyandottes were recognised by the American Poultry Association a few years later in 1883. There are currently 8 standardised large fowl colour varieties in America and 15 in bantam size recognised by the American Bantam Association.

The Wyandotte in England

The Silver Laced Wyandotte reached England shortly after being standardised in America and it was here that breeders realised they could not obtain perfectly marked birds when breeding stock in a single pen. The American Poultry Association Standard called for a white back and shoulders on the males and this could not produce females with perfect black and white lacing. Double mating was introduced where two pens were used, one with ‘cock breeders’ and one with ‘pullet breeders’ that would each produce their respective correctly marked birds. 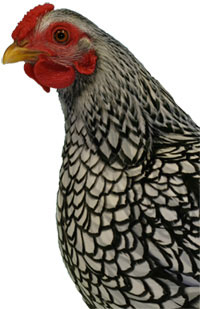 Many other varieties of Wyandotte soon followed, some even being popular enough to have their own breed club. There are currently 13 colour varieties recognised (listed under Colours in the breed information at the beginning of this page).

New colour varieties are still being created. One of the most recent is Chocolate Partridge which has been created by Grant Brereton, from an original project started by the late Dr. Clive Carefoot. A trio of Chocolate Partridge Wyandottes were on display at the Poultry Club National Exhibition in Stoneleigh 2009.

The Wyandotte as a Utility Bird

In England, farmers used a separate strain of the White Wyandotte as a utility bird from the 1920s onwards and there were a number of popular hybrid crosses used to create table birds.

Details of crosses can be found in a number of old poultry farming books of the 1930’s, but by far the most popular crosses were with Light Sussex. Further details can be found here on traditional table bird crosses. These utility crosses were short-lived though and were no longer of use as egg producers or table birds once Hybrid Chickens were introduced in the 1950’s.

Wyandottes are a popular breed of chicken being kept as a show bird and as a back garden pet. They are docile, medium-sized breed with a rose comb and clean legs that produce up to 200 eggs in their first season of laying and there are no shortage of stunning colour varieties easily available from poultry breeders in the UK.

Their fluffy behind may require a gentle trim if the feathers are getting mucky from droppings, or if mating proves to be unsuccessful.

Head of Gold Laced Wyandotte. Owned by and photo courtesy of Matt Hanson.

Buff Wyandotte owned by and photo courtesy of Matt Hanson.

One Response to "Wyandotte Chickens"