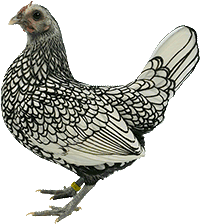 The Sebright bantam is one of a few breeds that are ‘true bantams’ (it has no larger equivalent). It was created in the early 19th Century by Sir John Sebright, the 7th Baronet of Besford, Worcestershire and possibly a few others by using ‘henny game’ but the details of the exact birds used are still unknown but to make the Gold Sebright, he possibly used a buff bantam Nankin hen with his ‘henny game’.

It is thought that it took him around 20 years of selection and inbreeding to achieve the patterns he wanted and to fix the type. To make the Silver Sebright it is thought he started by using a white Rosecomb cockerel.

All feathers are required to have black lacing and there are a number of very good birds around (in the UK) but watch out for peppering in the centre of the feathers. Check underneath tail feathers since this is a common area for this to occur. 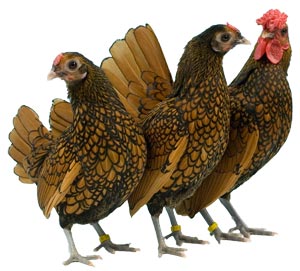 The background colour of the Gold Sebright varies from country to country and even between different breeders’ strains. It is more important to achieve an even shade of gold, rather than an exact shade, but very dark or very light shades should be avoided. Lack of lacing on the feathers under the wattles is called bishop throating and is a common problem.

Rose combs on male birds are often faulty. This should be square fronted, low and compact, not hollow fronted with a dent or side sprigs. Most birds on show do not have the dark purple comb, most these days having a pinker than ideal comb.

The beautiful Sebright bantam is one of the few standardised “true” Bantams and was created in the UK by Sir John Sebright (amongst others it is said) in the early part of the nineteenth century. Sir John had a vision to create a completely laced and “Henny feathered” bantam. After years of persistence, colour crossing, and the use of “Henny Game” he finally created the Sebright bantam. Details concerning which colour came first are sketchy and artist J.W. Ludlow described the birds he recalled circa 1850s as “creamy”. Whatever the facts, a Gold and a Silver Sebright were born, and have been bred as two separate varieties for well over a century. They are now known and bred across the world.

The precise laced plumage of Sebrights which carries right through to the tail is a sight to behold in both male and female specimens. This sets them apart from other laced breeds, which often struggle to neatly perfect the lacing in the tail area. One such example is the Silver Laced Wyandotte, which Americans don’t need reminding, is the original colour of its breed and thought to have been made from Sebright-crossed ancestry. The reason for this is the difference in genetic makeup between breeds. From a plumage perspective, the Sebrights have a different genetic basis and an extra gene to the Silver Laced Wyandottes which allows for the visual differences in lacing quality between the two breeds.

Sebrights are sprightly little characters and it is surprising how small they are in the flesh. The males have a piercing and strident call which can penetrate your ear drums if you get too close. They are not regarded as the best of laying breeds, with some Rare Breed centers in the UK claiming that you “only get around 12 eggs per year.” This may be the case for some, but fortunately other experiences differ greatly; personally my Silver Sebrights used to lay little white eggs for 3 to 4 months of the year (and quite regularly too). Many fanciers report getting 100 eggs per year when the conditions are right. Egg numbers likely depend on the level of inbreeding and the care in each individual strain.

The Sebright bantam is fairly well supported at shows and a good specimen, which is hard to breed, can often catch the judge’s eye, making it onto “championship row”. Some stalwarts of the breed include Robin Creighton, Brian Sinker, Steve Fuller, and Allan Edwards. The aforementioned are well and truly committed to not only the breed’s survival, but to perfecting its qualities, and anyone wishing to start with Sebright bantams would be wise to keep the above names in mind when sourcing stock in the UK.

Robin Creighton only breeds from pairs and leg rings all his stock so that he can identify the different generations and work out where his best birds are coming from. He says that most of his best birds can be traced to a single winning female which was the originator of his breeding programs.

What attracted me to the breed was the novelty factor. They are beyond bantam -they are tiny. Not only that, their markings are absolutely stunning. How such an even pattern can be attained right across the body in these minute little chickens is beyond me. I’m not sure they would have quite the same appeal if the males had “male feathering” but with their “hen-feathered” plumage, they are different from the female only in the otherwise natural sexual features, such as comb and wattles. They make for a very aesthetically pleasing sight; particularly when seen as a breeding trio.

There are several challenges when breeding Sebright bantams. It is not easy to get the correct lacing and background colour, and there is often a high level of infertility caused by inbreeding. Sebright bantams are also highly susceptible to Marek’s disease.

Never breed from birds with a light eye; the iris needs to be as dark as possible.

These are the breed clubs for Sebright Bantam chickens: