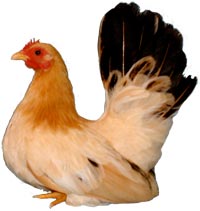 Japanese (or Chabo) Bantams are real show birds and go back a long way in history. It is thought that they first arrived in Japan from China in the early 1600’s when they started to appear in Japanese paintings. In Japan, they are called “Chabo” which means “bantam” or “dwarf” in Japanese but is also the old Japaneses name for South East Asia. They are thought to have reached the UK in the 1860’s and the first Japanese Bantam Club was formed at the Crystal Palace (London) show on 12th November 1912. The club didn’t have any activity during the two World Wars but resumed activities afterwards. The club was briefly amalgamated to the Frizzle club in 1946 but this didn’t last for long. The present Japanese Bantam Club of Great Britain was formed in 1961.

The annual club show is held at the Reading Bantam Club show and has a strong presence of exhibitors as in recent years the breed has become very popular. They are a true bantam which means they don’t have large fowl counterparts and are very distinctive with very short legs and very long straight vertical tail feathers with a relatively large comb and wings that are held low, touching the ground.

Japanese Bantams should be kept inside on clean, dry bedding in all but the best weather to maintain good feather condition. Feathers (especially white) will stain easily on the wing tips that drag on the floor if let out in the wet. During cold weather, it is often necessary to provide some additional heat unless they are kept in a reasonably well insulated building.