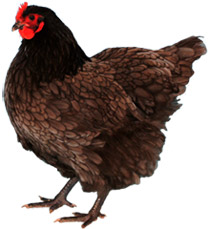 The Australorp is frequently overlooked by many poultry keepers yet, it has so many good things going for it! It is a hardy bird that is happy free ranging, is docile and good with children (even if a little heavy to lift up, but does exist in a bantam version) and is a good egg-layer as well as being a reasonable size white skinned meat bird. Being fast growers, they reach point of lay at about 20 to 22 weeks of age. The Australorp like the Orpington will generally not fly very high, making fencing easier. 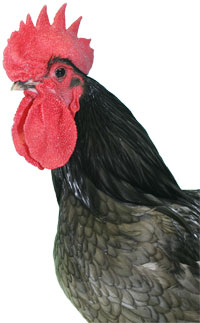 Australorps get their name from their origin as ‘Australian Orpingtons’ which had been called ‘Utility Type Orpingtons’ before that. They were essentially early Black Orpingtons were imported into Australia around the late 1880’s and refined for Utility purposes and later after the Orpington had been modified in Britain, exported back as Australorps in the early 1920’s.

They are a large, soft-feathered bird and have either glossy black feathers with a lustrous green sheen, or slate blue with dark lacing. The white is very seldom seen. They have a single comb that is moderately large and upright, with five points and a very dark beady eye. Bantam varieties also exist in this breed. They have 4 toes and feather free legs. Look after these girls and they will lay around 200 to 250 eggs in a year for you (depending on the strain) without artificial lighting. Fortunately the breed has not been altered much, unlike the Black Orpington amongst others that has over the years changed from a utility bird into a show bird. Their eggs are medium-sized and light brown in colour.

Some stories that have emerged from when the breed was being developed in Australia claim that a hen laid 364 eggs in 365 days. In 1922-23, six hens set a world record by laying (on average) 309.5 eggs each during a 365 day egg laying trial. When the breed was brought to the UK, the amazing egg laying records were not achieved and it was thought that either the UK climate was to blame, or the best egg laying stock was not sent.