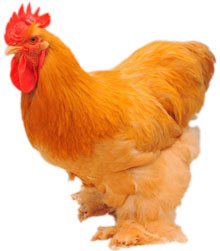 Cochin chickens were originally imported into the UK from Cochin-China, a French Colony that is present day Vietnam around 1843. They are in fact unrelated to the birds we know as Cochins today and all they left was their name. They were large birds with feathered feet. In 1847, some large feather legged birds were imported from Shanghai. Poultry keepers were used to calling these large feathered legged birds from Asia Cochins or China-Cochins and this was how they became named, even though they were technically unrelated to the original Cochins that were imported.

The ‘new’ imported Cochins were very similar to what we have today but there was less foot feathering and their colours were not stable but on arriving in the UK, the Buff Cochin was soon stabilised, shortly followed by Partridge.

The Cochin Bantam came from a different place (Peking) in China and was really quite different to their larger counterparts. In the UK was renamed to the Pekin Bantam after much debate over many years. Around the rest of the World, Cochin Bantams are very similar in appearance to the British ‘Pekin Bantams‘.

Partridge Cochins require double mating (separate Cock breeders and Pullet breeders) to produce the correct colour and markings in their offspring. There are very few cockerel breeders left, most preferring to breed pullets for show. White Cochins are easier to breed than the correct colour Buff, or Partridge but like many other Whites do need a shaded run to stop them going brassy in colour. During their moult, stop feeding maize and grass (there is a pigment that colours the feathers) to keep the feathers white and stop them from turning cream. Due to their feathered feet, birds should not be kept in a muddy run.