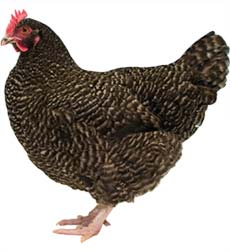 The Marans was developed during the 1920’s near the town of Marans, North of La Rochelle in Poitou Charente, France. The original Marans had lightly feathered legs, something that can still be seen in French birds. Many strains of Copper Black Marans (non standard in the UK) still have reasonable amounts of feathering on the legs and are often referred to as ‘French Copper Black Marans’ because of this.

The British Poultry Standards lists feathered shanks as a serious defect. As with many utility type breeds around this time, there was great pressure to export the Marans before the type was properly fixed (which took longer due to the number of breeds that were used to create it). The original birds were producing many variations from the standard type but when it was brought to England in 1929, the type was fixed and by the mid 1930’s, the first Cuckoo Marans entered the British Poultry Standards.

The Marans are thought to be made up from quite a number of very old breeds: Barred Plymouth Rock, Coucou de Malines, Croad Langshan, and Faverolles but also some Rennes (this is a place in Brittany and thought to be a cuckoo breed), Gatinaise and possibly Brakel depending on who you speak to.

There are 4 standard colour varieties in the UK, 9 in France, and 4 in Germany. The American Poultry Association has stated that if a Marans is accepted to their standard, it will no doubt have feathered shanks and a cleaned shanked bird will not be accepted (source Marans of America Website).

To improve the colour of Marans eggs, you should only select the darkest brown eggs to hatch. Breeding from hens (and Cocks) that come from dark brown eggs themselves will ensure that you are concentrating this gene in your strain and get more of the same thing.

Copper Black Marans Male in Germany at the Hannover Show 2009.