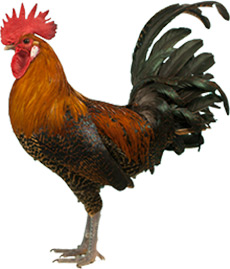 Uses: Utility: Laying. Conservation. Eggs: 180-200 white.
Origin: Brakel East of Brussels in Belgium.
Weight: Cock: 3.2Kg, Hen: 2.75Kg.
Bantam: Cock: 790g, Hen: 700g.
Colours: Silver, Gold (Standardised UK).
Useful to Know: The Brakel is very similar to the Campine. It is an extremely rare breed today. There are very few breeders, (probably only a handful left in the UK) and desperately needs more poultry keepers to take on this breed if it is to survive.
Photo: A very rare Gold Brakel male owned by P. A. Morrison.

Brakel or Braekel chickens originate from the village of Brakel, not far from the market town of Aalst to the east of Brussels in Belgium. They were kept by most of the farmers in the region to produce eggs, until they switched to using hybrid chickens during the 1960’s. Aalst became well-known by table poultry and egg buyers from the capital which assisted in developing a poultry industry in the surrounding areas.

Brakels are similar to the Campine which originated in Antwerp in the northern part of Belgium. Brakel and Campine females look almost the same, but Brakel males have normal cock feathering, whilst Campine males have hen feathering which distinguishes the two, together with subtle differences in weight.

It was in 1884 that an article appeared in Avicultura magazine trying to distinguish the two as separate breeds. At this time, the only significant difference was their weight, the Brakel being the heavier of the two. This difference in weight was thought to be because farmers in the Antwerp region were less prosperous so raised their birds in wooded areas where they needed to be light enough to roost in trees at night, away from predators. In the region surrounding Aalst, there was a more prosperous poultry economy and fewer woods, so birds were housed at night and there wasn’t a need for a lighter weight fowl. Later on, once the breeds were established, the Campine males were bred with ‘hen feathering’ which distinguished the two breeds.

The Brakel is an extremely rare breed today. There are very few breeders, probably only a handful left in the UK (if you breed them and have any photos I can share, please contact me – thanks, Tim)

Due to their long tail feathers, male birds require perches that are far enough away from the wall of the hen-house. Some shade needs to be provided for silver birds so they do not change colour in the sun.

Breed sufficient numbers to allow selection of the correct markings, not many males have the required clear barring on their tail feathers. Find other breeders and swap birds to conserve the very few blood lines that are left.