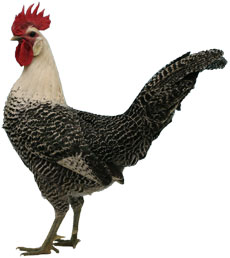 Campine chickens originated from Antwerp in the northern part of Belgium. Being so close to the border with The Netherlands and France, it’s no surprise that a number of ‘local’ breeds were thought to have contributed to its creation. The Brakel, another breed from Belgium, the Hergines Fowl from France and the Chaamse Hoen from The Netherlands are all believed to have been involved in its creation.

The Campine was regarded simply as a village hen but the British enthusiasts of the time took them and refined them, creating an exhibition bird. They adopted hen feathered males to avoid the problems they had seen with double mating of Pencilled Hamburghs (double mating means keeping a pen to breed males and a separate pen to breed females).

The Bantam size didn’t appear in the UK until the 1950’s and has been sporadically seen since then. It’s thought that none currently exist in the UK. The Campine Club was merged into the Rare Poultry Society at its formation in 1969.

Campines thrive in large grassy areas with adequate shade to prevent silver birds plumage from discolouring. Due to the tail size of the male, sufficient space should be provided between the perch and the wall of the hen-house to prevent their tail feathers from breaking.