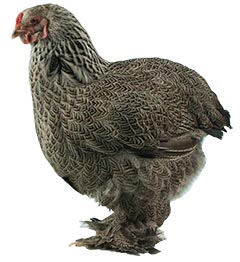 Brahma chickens have caused many arguments between fanciers during the mid to late 1800’s about their origins. On one side were those that believed the breed was created with Shanghais from China and on the other, those that believed the breed came from India being named after the Brahmaputra River. It is generally accepted now that they were from China.

Light Brahmas can be considered an American breed. In the 1840’s many Shanghais were being imported into the East Coast of America. It was from one of these imports of birds in1846 that the plumage pattern was refined and a pea comb introduced which went on to become the Light Brahma.

The confusion that seems to have been caused was that the ship that brought them in came from the Ganges Delta (present day Bangladesh) and the Brahmaputra river joins this.

There were several names in the poultry press for these birds but it is believed that the name was given to them, either by the importer, or the seller. In these days, many exotic poultry breeds were being imported and the more exotic and rare the birds were, the higher the price could be obtained for them!

What we know now is the ship was likely to have come from Shanghai, stopping off in India. We also know that there were Shanghais and Cochins with feathered feet in China. The British were in India during this time and most kept some poultry with a good knowledge of the various breeds. There are no accounts of chickens fitting the description of the Brahma, or even birds with feathered feet, most were game types like the fighting cocks such as the Asil.

Brahmas were kept very much as a utility breed in the US whereas in the UK they went in the opposite direction – they were kept for exhibition and as ornamental birds, losing their utility qualities.

It was thought Dark Brahmas did have some Indian blood. Some stock from India was used to refine them. The Dark never really took off in America but the British preferred the Dark Brahmas and quickly went about refining them for exhibition. In order to get the correct markings, breeders had to double mate (have separate Cock breeder and Pullet breeder birds that didn’t conform to the standards but produced correctly marked offspring.

Brahma chickens were admitted to the American Standard of Perfection in 1874. Buff (called Buff Columbian in Britain) followed in 1924. Light, Dark and Buff are the only colour varieties standardised. The American Standard continues to require less feathering than the British Standard but both require large / heavy birds.

Neat pea combs are required and Walnut combed birds should not be used for breeding, they should be used as pet quality birds only or culled (the comb can be seen on chicks at an early age).

Lights, Buff Columbians and associated Blues can be single mated but Darks, Gold Partridge and Blue versions should be double mated for the best results.

Vulture hocks are permitted in Britain but not in America.

Brahmas are large birds so will require larger housing than most breeds, so consideration should be given to the number of birds that can be kept. Being a large bird, they also have a large appetite! Cutting corners, such as feeding lower costing wheat will cause growth and health problems because of the lower protein levels.

Not sure of the Variety? Brahma Male owned by Jackie Moore.