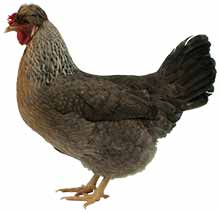 The Legbar was one of the first autosexing chickens that was created at Cambridge University in England and one of the most successful.

When autosexing breeds were being created, commercial poultry breeding and egg production was very much tied in with showing poultry. Whilst it was known that crossing genetically ‘gold’ and ‘silver’ birds such as Rhode Island Red and Light Sussex produced sex linked offspring (the male and female chicks could be identified at day old), many breeders didn’t consider hybrid crosses as being worth-while for commercial production.

Often, they couldn’t keep sufficient stocks of breeding stock as well as the hybrid chickens on small farms, so there was a demand for an autosexing pure breed that would lay well.

The Legbar was the second autosexing breed to be created (after the Cambar which was never popular or that productive as an egg layer and has now become extinct to our knowledge).

The first colour variety was the Gold Legbar and was based on the brown Leghorn cock and Barred Plymouth Rock Hens, both from utility strains which were used in the first mating.

The second mating took two of the male offspring, mating them with brown Leghorn hens. After producing many hundreds of chicks, selection was performed and then these birds were mated and from their offspring, light coloured males with two barring genes were kept together with the Crele coloured females.

Silver Legbars were created using the Gold Legbar, crossed to the Silver Cambar. White Leghorns were also used along the way in order to improve egg production. 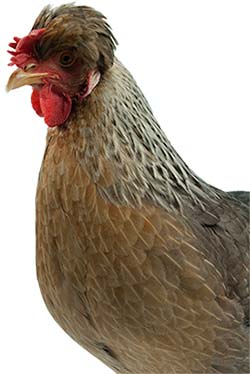 In 1939 Michael Pease was working with some Gold Legbars that he had been trying to improve by crossing into a utility White Leghorn cock that he had obtained from Cheshire College of Agriculture. He kept two pullets from this mating that were ‘off white’ in colour and put these back to a Gold Legbar cock from the same strain he had started with.

118 chicks were hatched over a two-year period and 49 of these looked much the same as the Gold Legbar, the remaining birds being white in colour. He crossed these (i.e. brother to sister) to try to reveal any recessive genes (from the White Leghorn, since the dominant white gene carries many other plumage colour genes hidden) and had some unexpected cream coloured offspring that still retained autosexing qualities.

These birds were crossed with the then (rather new) Cream Araucanas in 1940 that Professor Punnett had in Cambridge as an experiment with Cream coloured birds. These had crests and laid blue eggs and from this cross, the Crested Cream Legbar was established. It is said the crest was kept in order to prevent confusion with the Silver Legbar.

The Cream Legbar is very different in make up to the Gold or Silver Legbar so is considered by many as a separate breed but at this time, the Poultry Club of Great Britain classifies it as a variety of Legbar.

The Gold Legbar was the first to be standardised in 1945, followed by Silver Legbar in 1951 and the Cream Legbar in 1958.

Cream Legbar chicks can be sexed by their down colour. The photograph below shows the difference between the male (who is lighter in appearance and has a yellow ‘spot’ on the top of his head) and the female (who has a darker back with darker ‘stripes’). 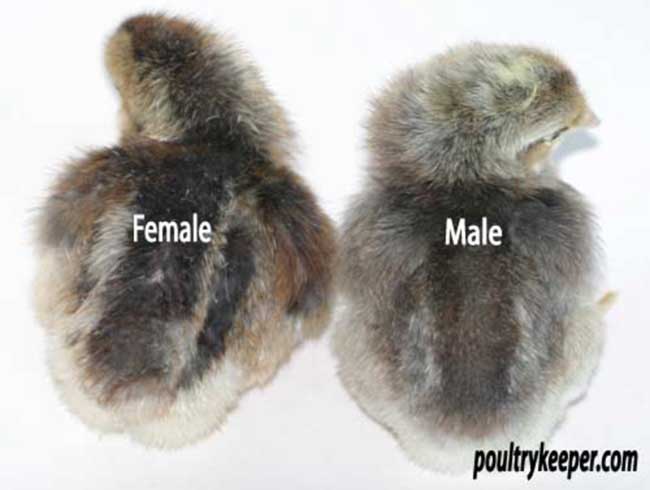 The Gold Legbar is rare in the UK, the Silver hasn’t been around for some time, although it would be possible to re-make them by crossing Gold Legbars with Silver Duckwing Leghorns and then selecting the Silver offspring for a number of generations. Many Cream Legbars have lost their autosexing qualities. Selection for this quality is important when breeding.