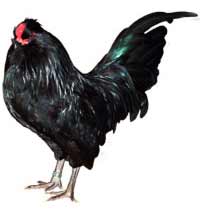 The Araucana comes from South America and are named after the Araucano tribe of Native South Americans. There are records of blue egg laying chickens in South America going back to the 1520’s. They first appeared in Europe at the World Poultry Congress in The Netherlands in 1921, exhibited by Prof. Castello who imported them around 1914. These were rumpless birds with pea combs and tufts of feathers growing near their ears and laid blue eggs. Rumpless birds had an advantage in the wild because predators struggled to catch them!

There has been much argument from that day to this between American and European breeders as to what Araucana chickens should look like since the original birds Prof. Castello exhibited turned out to be the result of a cross of two breeds. The mistake was corrected at the next Poultry Congress in 1924 but it was already too late, fanciers had well and truly established the Standard and had put in a lot of work to meeting this standard. Original birds had beards.

When showing Rumpless Araucanas, they are required to have beards in the U.K. In other countries, beards are also permitted, however in the U.S. they will be disqualified for having them. The original birds also had single combs which are now a disqualification at shows.