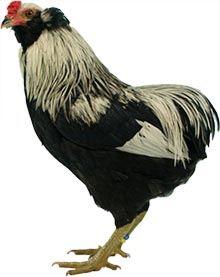 Rumpless Araucana chickens are called ‘Araucanas’ in the American Standard of Perfection and Araucanas are called ‘Americaunas’. Since the 1920’s, there has been a lot of discussion between American and European poultry experts on what an Araucana should look like!

The different names in America started with the two governing bodies: The American Poultry Association (APA) and the American Bantam Association (ABA) who now work in harmony with one another. The ABA standardised the Araucana in 1965 and allowed rumpless and tailed types in bantams with and without ear tufts. The APA admitted rumpless types with ear tufts in 1976. The tailed types were then standardised as Americaunas in the early 1980’s when the standards were harmonised. 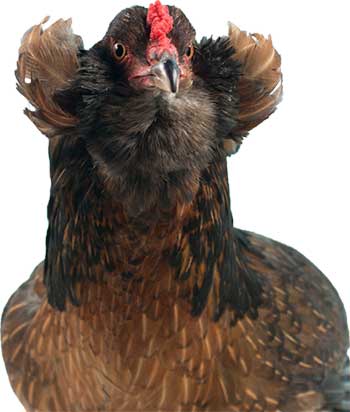 The Rumpless Araucana is a truely unique breed. Firstly, it has tufts of feathers coming out from near their ears, secondly, they lay blue to green coloured eggs (other blue / green egg layers have been created from crosses with the Araucana / Rumpless Araucana) and thirdly, they are rumpless: they do not have a tail. Originating in South America (most texts suggest Chille but in fact there are very early records of these chickens in many countries of South America), the Rumpless Araucana.

The Araucana breed page covers the history of the Araucana so it is not repeated here.

Rumpless Araucanas are required by the British Poultry Standard to have beards. In other countries, beards are also permitted, however in North America, they will be disqualified for having them. The original birds also had single combs which are now a disqualification at shows so must be avoided.