The Other Type of Gold (Red)

When learning about how Gold and Silver genes work in poultry, it can be very gratifying to realise that much can be made of the sex-linked cross (Gold male over Silver female). This produces sex-identifiable progeny in the day-old offspring (yellow males and brown females). 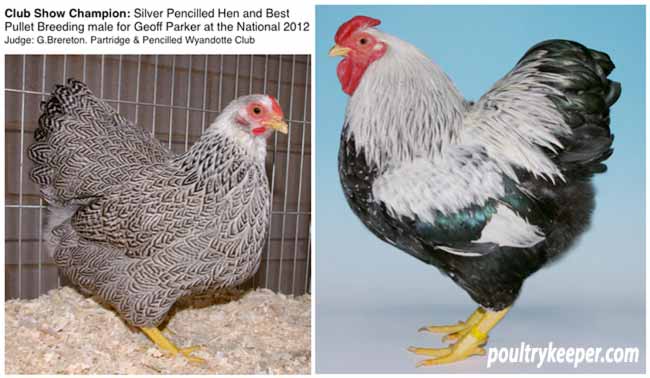 Silver Pencilled Wyandottes. These specimens being ‘non-carriers’ of the Ap gene.

When it comes to colour, the Silver gene is dominant over Gold and so beneath a Silver Pencilled Wyandotte lies a Partridge Wyandotte, for example. 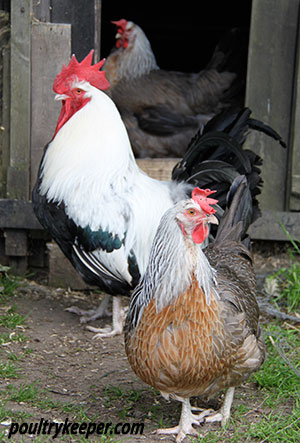 A pure Silver Pencilled Wyandotte male has 2 doses of Silver and the female only has 1. This is because she can only carry a single copy of the gene (on her male sex chromosome).

However, this is not the end of the story. A good job too, otherwise some of the beautiful colours and varieties wouldn’t be possible.

I’m talking about a kind of Gold that’s unaffected by the Silver gene, and this can be found in the breast of the Silver-Grey Dorking female (show right).

It can also be observed on the backs of Salmon Faverolles females and other varieties.

Right: Silver-Grey Dorkings with the Ap gene visible in the breast of the female.

It was Brian Reeder of the U.S. who observed that not only was the ‘non-sex-linked’ Gold (Red – which he named ‘Ap’) in breeds such as the aforementioned, but that its was present in many other varieties. He also noted that its expression was largely dependent on dosage, and the quantity of genes present which can reduce or enhance its penetrance (visual strength).

This gene is the main reason why people who breed pure Silver varieties get so frustrated with those who cross their birds to Gold versions of the same breed. For example, crossing Silver Dutch bantams to Golds can have disastrous effects for Silvers.
The ‘Ap’ gene we know is in both varieties, but ‘Silver breeds’ contain additional genes to suppress any Red pigment on the shoulders of the male. 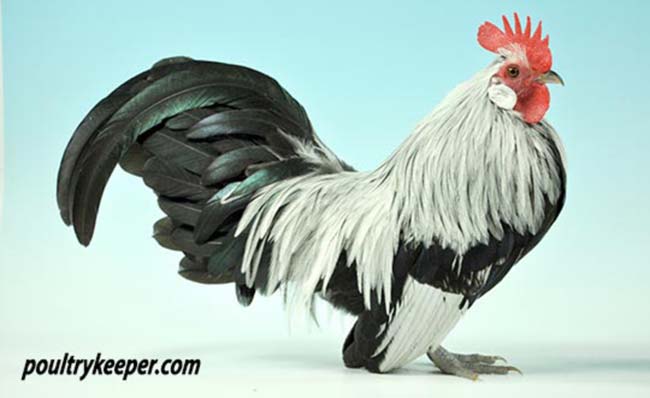 Silver Dutch Bantam: To get birds looking as clean a Silver as this, you don’t only require
purity of the Silver gene, but also ‘suppressor’ genes which assist in the shoulder area.

Silver-Grey Dorkings possess the same genes. When they are crossed to Gold versions of the same breed, those ‘suppressors’ are split for purity and hence it takes more than purifying the Silver gene to produce clean, Silver shoulders (the suppressors need purifying too).

Gold and Silver in the same bird

If the ‘Ap’ gene didn’t exist, it wouldn’t be possible to produce the wonderful Salmon Faverolles colouration seen in the male (the shoulder being a deep Mahogany Red in the best examples). This is because the Silver gene struggles to express in certain areas of the male that carries ‘Ap’ – especially when the Mahogany gene is also present. 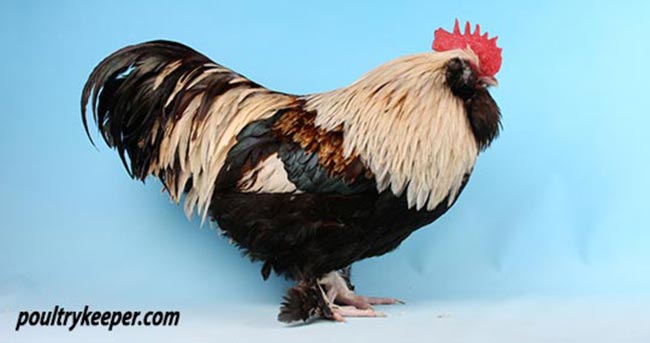 The Mahogany gene intensifies the ‘Ap’ to allow for a real dark-Red colouration (the best examples would be Rhode Island Reds). 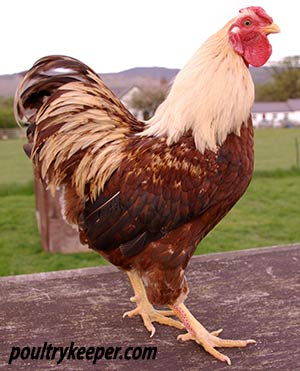 Many people think that adding the Silver gene to a Rhode Island Red would produce Silver birds, but the Silver gene would only have the power to alter the neck and saddle hackles and wing bay (triangle); the rest of the bird would be Red as shown below.

Photo Right: This is what a Rhode Island Red would look like if you added 2 doses of the Silver gene to a male. It would only affect the sex-linked Gold and not the Ap / Mahogany.

The Columbian gene has the power to override ‘Ap’ and I discovered this for myself when I crossed a Buff-Columbian Wyandotte to a Brown Leghorn: the offspring just looked like Buff-Columbians (with mossy backs). The breast feathers of the females were orange instead of Salmon in colour.

Previous crosses of Partridge Wyandottes and Brown Leghorns (both ways) indicated that the Salmon breast of the Leghorn is very dominant over the Partridge feathering (whether sharply pencilled or not). Thus considering Buff-Columbian Wyandottes are genetically ‘Partridge,’ I was able to determine that the ‘Ap’ had little effect in the presence of Columbian (except perhaps in the shoulders of males, but that is debatable). 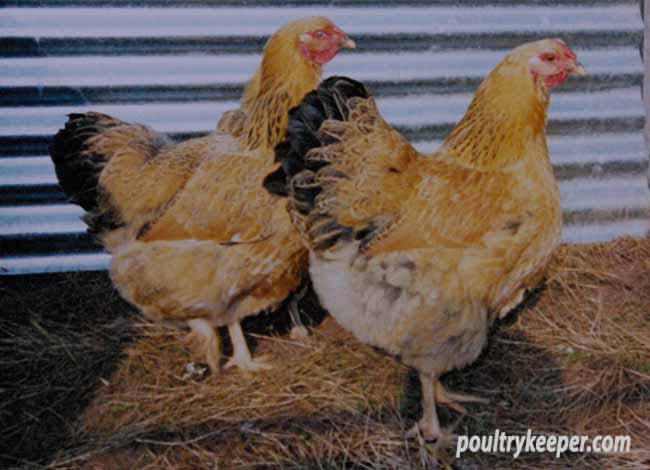 Once many newcomers learn about Poultry Genetics, they spend hours pontificating on forums trying to determine what colour enhancing / diluting genes certain varieties carry. (I know because I have been there).

My advice is not to get caught up in it all. We know that American Partridge Wyandottes are pure for Mahogany, and we know that British Partridge Wyandottes are pure for ‘absence’ of Mahogany. However, other breeds are more difficult to determine, and when you start talking about what dose of ‘Mahogany’ and ‘Dilute’ a certain crossbreed has, it can only really be guesswork (unless you have conclusive evidence of the parental make-up). 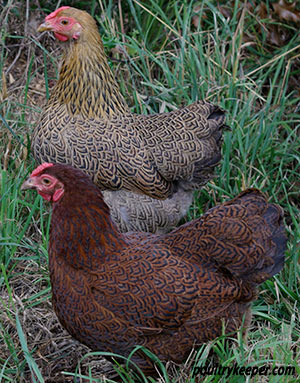 The Mahogany and Dilute genes are well-documented, so definitely exist, but the array of phenotypic (visual) combinations possible when combined is little understood. The truth is, no-one really knows. It’s easy to look at a bird and conclude that it has ‘one dose of Mahogany and 2 doses of Dilute’ etc, but it’s virtually impossible to be certain; it is now believed there are other Gold diluting genes other than ‘Dilute’ as well as additional Red intensifying genes other than Mahogany. You only have to visit a Continental show to realise that it’s not quite as simply as some people would have you believe. 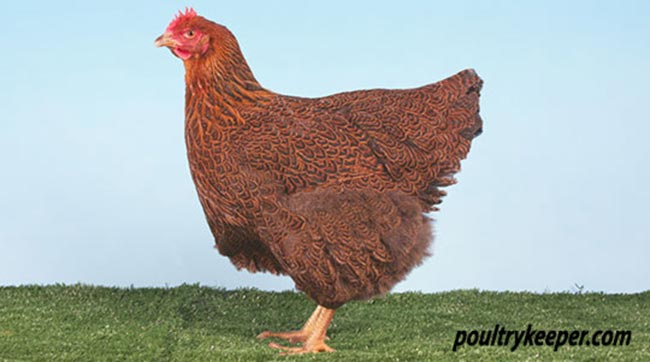 Above: The in-betweener. It is very difficult to tell which colour enhancing / reducing genes this bird carries. Unlike the birds above, it is not distinctly one thing or the other, & some Geneticists would have a case when arguing that it is pure for both the Mahogany and Dilute genes. 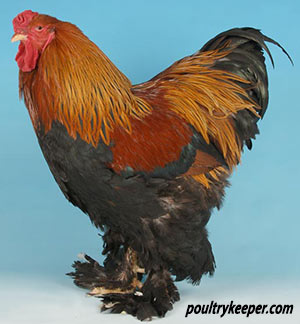 When I teach Poultry Genetics, I like to cover the basics and discuss what we know, rather than what cannot be understood without expensive gene sequencing.

The subject should be fun, so I only refer to genes such as ‘Ap’ when I believe a variety shows plausable signs of carrying it – such as when a Silver Pencilled Wyandotte female displays a great deal of ‘rust’ in her otherwise-Silver ground colour.

Right: What colour enhancing / diluting genes is this bird carrying? He appears to have Dilute & possibly Ap, or he could have neither; it’s very difficult to tell because the effect of 2 genes ‘battling it out’ can often mimmic the phenotype of the absence of both genes.

The non-sex-linked Gold (Red) ‘Ap’ is most certainly an inherent part of the Wild Type (as in Welsummers) colouring, as well as Wheaten colouring, but Brian Reeder has discovered that the link can be broken and has produced birds to support his theory.

The main point to grasp from this article is that Silver only really has an effect on sex-linked Gold, and there is another type of Gold (Red) ‘Ap’ which is needed to produce varieties such as Silver-Grey Dorking (females) and Salmon Faverolles, but which also requires additional genes (probably Cream) to make the clean Silver varieties free of Red ‘pollution’ in the males.