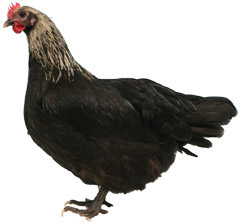 The Norfolk Grey was created by Mr Fred W. Myhill of Norwich, Norfolk. The first birds were given the name Black Marias (the nick name of a First World War German military shell but also a type of plane) and were shown for the first time at the 1920 Dairy Show. The name was not popular with fanciers and around 1925 their name was changed to the Norfolk Grey. Thomas Leyson of Stowmarket, Suffolk, a friend of Mr. Myhill wrote an article for The Feathered World Yearbook 1927 a few years later and said that “…it is a fact that the change produced an immediate effect and several new breeders took them up.”

The following year a Norfolk Grey Club was formed with Thomas Leyson as the Secretary, however by 1930 the number of entries at shows had started to decline. To improve markings, a hybrid variation, thought to be a cross into the dark grey Old English Game was starting to appear at shows. This was a smaller bodied bird, laid fewer (cream coloured) eggs but was winning awards at shows.

The original birds are thought to be the result of crossing Silver Birchen Game and Duckwing Leghorns although Mr. Myhill suggested a cross between the Dorking and Wyandotte in the Poultry Yearbook 1923 magazine. It is likely these could have been used at some point or perhaps they were only mentioned to draw similarities to these popular breeds at the time or even to confuse people about the real make up of the Norfolk Grey. Orpingtons, and Langshans, both successful and popular utility breeds of the time are other likely candidates.

The Norfolk Grey Club was closed down during the Second World War. The breed never really recovered in numbers after the War and was thought to be extinct by the 1960’s.

It wasn’t until 1974 that Reverend Andrew Bowden and his wife visited a farm near Banbury where they came across a trio of Norfolk Greys, the farmer had kept the breed going for many years and agreed to sell these birds and from the efforts of the Reverend and his wife. By 1978, there were very few in existence but Roland Axman of Fakenham, Norfolk spent two and a half years tracking down a small number of Norfolk Greys and eventually with the help of his wife Mavis, managed to start a breeding program to resurrect the breed.

The Norfolk Grey is classified as a rare breed. There are both Large Fowl and Bantam versions that are standardised in one plumage colour not surprisingly, the small number of breeders that keep them are found in and around the County of Norfolk.

Plumage is beautifully marked, the male having the most noticeable silver hackles striped with black. If showing them, as with white feathered breeds, it is beneficial to have shaded runs and to control their diet to avoid the silver turning brassy.

To maintain their large size, close inbreeding should be avoided by keeping as large a flock as possible and outcrossing as necessary to other bloodlines. Trap nesting is beneficial if egg numbers decline. Silver plumage can be kept from going brassy by providing adequate shading from the sun.

One Response to "Norfolk Grey Chickens"