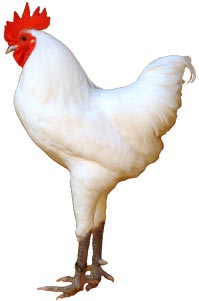 The German Langshan or Deutsches Langshan as it is called in Germany is a tall, neat and elegant breed, often described as having a ‘wine glass’ shape when standing correctly with the head and tail almost level and a ‘U shaped’ back.

The first Lanshans to arrive in Germany were the Croad Langshans from Major and Miss Croad in 1879 which were thought to have been crossed with the Plymouth Rock amongst others to eventually end up as German Langshan chickens. The white variety is thought to have been as a result of white Langshan imports in 1880 by Baron Villa-Secca from Vienna crossed with white Orpingtons. By 1895, the ‘Clubs Deutscher Langschan-Zuchter’ (German Langshan Club) was formed in Germany.

Of the standardised colour varieties in the UK, black has always been the most popular, white is a little harder to find and blue is extremely rare, most seen today are bantams. In Germany, the German Langshan is far more popular and other colour varieties exist (Buff, Brown-Red, Birchen, Silver-Blue, Lemon-Blue, Red and Barred) although with the exception of barred (created around 2004) only in the bantam size.

Croad Langshan bantams were created in Germany sometime around 1902 from a mixture of breeds including Cochin and Rosecomb bantams. By 1912, German Langshan Bantams also started to appear. Over the years, many colour varieties were created, the most being perfected in the 1960’s. During the 1990’s further colours were created (Lemon-Blue, Silver-Blue, Buffs, Columbians and Buff Columbians).