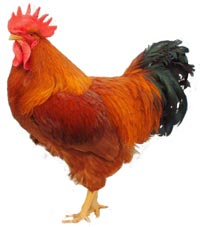 New Hampshire Red Chickens take their name from the State of New Hampshire in the U.S which neighbours the State of Rhode Island that developed the well-known Rhode Island Red (RIR). It was developed initially as a commercial breed by Professor ‘Red’ Richardson, a poultry lecturer at the University of New Hampshire around 1918 from selected strains of RIR, without introducing any other breed. He was trying to improve upon some of the qualities of the RIR to improve profitability of the broiler industry that was starting to evolve locally to supply the markets of New York. He ignored colour and kept selections of slightly different colour varieties, primarily selecting for faster feathering birds which meant they would retain heat and increase feed conversion. Good hatchability of eggs was another one of his selection criteria which in the days where incubators were still new on the market and could be somewhat temperamental, was necessary for farms to be successful.

During the 1920’s, many farms took them up and during the mid-1930’s the New Hampshire Red reached the U.K. They were used as a commercial bird by a handful of farms but the RIR was more popular being used after the war as a hybrid cross with the Light Sussex. Along with a few other breeds (like the Plymouth Rock / Amrock), they were introduced into Germany as part of the post war reconstruction efforts.

They became popular in Germany and the Netherlands, as exhibition birds during the 70’s and by the 1980’s they started to gain popularity in the U.K. They joined the Rare Poultry Society until 1997 when the New Hampshire Red Poultry Club was formed.

The RIR is distinctly different in both colour and type to the Rhode Island Red and the differences in colour are clearly defined. The New Hampshire Red was first standardised by the American Poultry Association in 1935, some years after its creation. There are two very rare colour varieties that are not standardised in the U.S or U.K, these are Blue Tailed New Hampshire Reds (created in the Netherlands during the late 1980’s) and New Hampshire Whites (created by crossing New Hampshire Reds with White Barnevelders during the early 1950’s in Germany). Very little has been found about these and if you have any information or photos of these, we would be interested to speak with you.