Grant Brereton, a leading authority on poultry plumage genetics examines the Barred Wyandotte and provides some tips on their genetics and breeding.

According to David Scrivener’s Popular Poultry Breeds, although an American breed, the Barred variety of Wyandotte was actually created in Germany through crossings of Barred Rocks and Black Wyandottes (as well as possibly Dominiques). 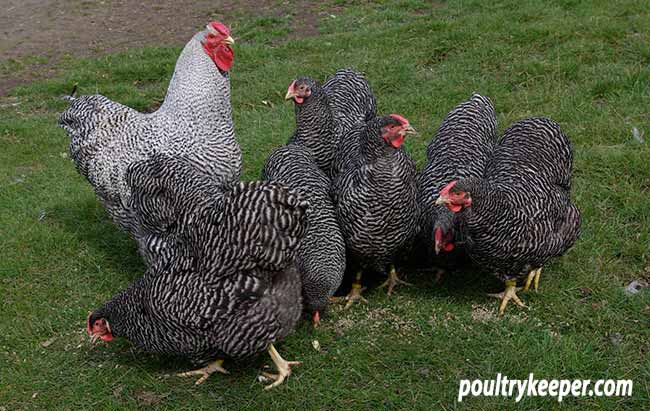 A true-breeding pen. The male clearly having 2 doses of the Barring Gene.

Interestingly, though, the ancestry of these Barred Wyandottes belongs in the US, and certain traits can still be seen today – such as the really long saddle and tail feathers introduced by E. B. Thompson when he crossed his Barred Rocks to a line of Dan Young’s Leghorns.

This was back in the1930’s when production was a crucial part of a strain’s attributes. 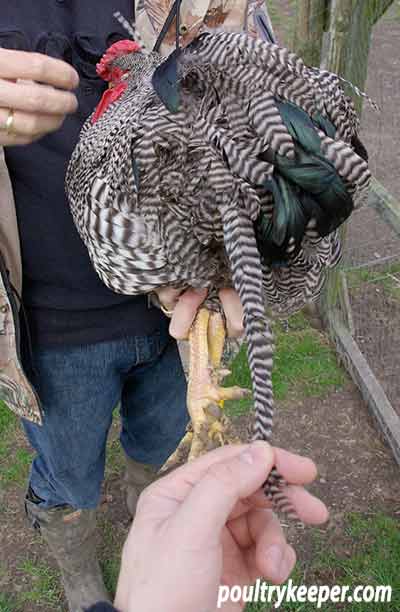 The long feathers still seen in the large Barreds today are thought to have been introduced when Dan Young crossed his White Leghorns to Phoenix and Proto-Phoenix (Onagadori) lines. (Ref: Brian Reeder & Dan J Honour).

Photo Right: The long tail and saddle feathers are still in many lines of Barred Wyandottes, introduced by  American breeder E. B. Thompson, whose Plymouth Rocks had some Dan Young Leghorn and Phoenix-based blood in them.

The large Barred Wyandottes in the UK have a lot of foreign blood in them. They are mainly Dutch and German-derived stock, and birds have been imported from the Continent for decades.

Other strains on our shores have Plymouth Rock blood in them, as do the Continental specimens (as well as Amrock). Breeders home and abroad are on a constant quest to produce Barred Wyandottes akin to the finely barred Rocks, but the rounded feathers of the Wyandotte make this rather challenging.

The subject of barring in poultry can get really complex if you delve deep enough – it’s easy enough to understand how the dosage effects work (the basics), but the fine details are a different matter…

The black and white bars need to be as ‘even as possible’ in the UK (not one stripe wider than the other), but this can be really difficult to achieve – particularly all over the body. You can pick out a feather that looks perfect on the back of a pullet, for example, but then the surrounding feathers sometimes aren’t of the same quality. Quite what causes this variation in the same bird is little understood (only diligent selection can fix it).

Of course, we don’t help ourselves in calling for a standard similar to the Plymouth Rock. Exhibition males are required to be just as dark as the females, and this means that both sexes can’t be produced from the same ‘true-breeding’ pen (the females may be correct, but the males will always be too light).

In Holland and Germany, Barred males and females are bred from the same pen, but the males are ‘too light’ for the UK show bench.

The light males (as mentioned), will produce only light males and Barred females when bred with Barred females. These birds are ‘true-breeding’ and it works because barring is ‘sex-linked’ and the males in question carry both copies of the barring gene.

The exhibition (dark) males in the UK are rare – probably because they don’t breed true. When paired with a Barred female, a dark-Barred male will produce the following: Barred females, Black females, light-Barred males, and dark-Barred males (as himself), so you can see why it’s an unattractive prospect for breeders. These dark males often (as do all Barred pullets), have occasional black feathers throughout the body. 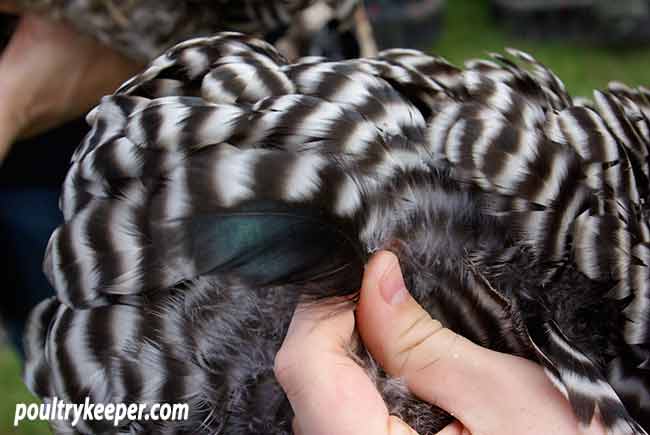 The black feathers that occasionally appear in Barred females and Dark-Barred males.

The term ‘Pullet-breeder’ is generally (and incorrectly) assigned to the light males, with the thinking being that they only produce Barred pullets rather than both Barred and Black pullets (which is true). However, to call them ‘Pullet-breeders’ isn’t quite correct, because to be given the prestige title of ‘Pullet- breeder,’ the male in question must have proved his worth in the breeding pen and sired excellent pullets.

There is, of course, a way to produce 100% dark males from a breeding pen, but this will require a bit of planning. As mentioned, these dark males don’t breed true, so it will be necessary to locate one of their Black daughters (these usually have black legs). It’s
important that the black female is the daughter of a dark-Barred male – she will carry the right genes for Barring right to the skin and slow feathering. Not any old Black Wyandotte female will do! 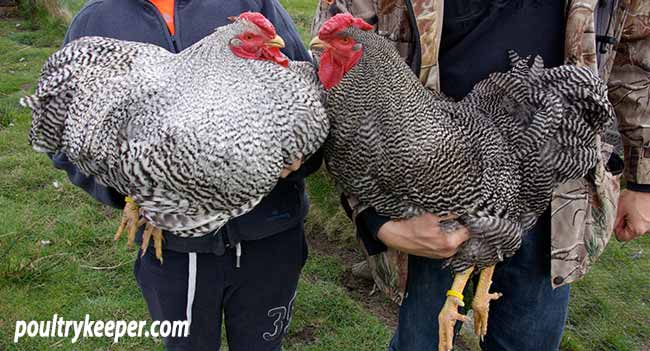 Once you have the correct Black female, you need to locate a light-Barred male (preferably a son of a dark-Barred male), and then breed them together. This should produce males and females of the same exhibition quality – the males will be as dark as the females and ideally, the black bars will have a beetle-green-sheen when viewed in natural light.

Despite strict breeding, it can be very difficult to produce a Barred Wyandotte with overall good qualities. Barring can fail in many ways: it can be blurry (where the black runs into the white), or one of the shades can be too wide – often the white part. 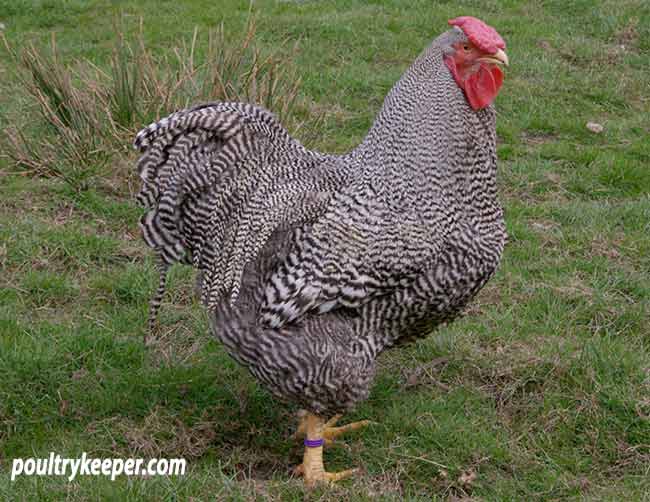 An ‘Inbetweener’ male (visually). These males are usually carrying 2 doses of the Barring Gene, but it isn’t always obvious as they are rather ambiguous in appearance.

The only real way forward with Barred Wyandottes is to create a close family unit that produces consistent quality barring. Otherwise, the years of hard work and selection can be undone in a single mating. Outcrosses should be carried out with great caution and attention should be paid to the source of the stock used for such purposes.