Jeremy Hobson knows they have no different nutritional value, but that they are, nevertheless, still preferred by most people in the U.K when choosing an egg for their breakfast!

What is it that makes a tray of brown eggs sell quicker than a tray of white ones? Provided that the hens which lay the brown eggs have been given exactly the same environment and feeding regime as the ones that laid the white ones, they do (and it has been scientifically proven), all taste the same. Nevertheless, position a Keyes tray of white eggs at the front of a stall at a farmer’s market and a tray of brown eggs at the back and you will find that, by the end of the day, the brown eggs have sold more rapidly than the white. 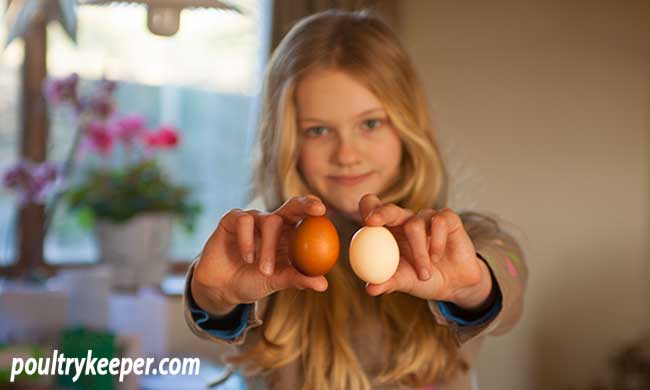 Of course, were you to conduct the same experiment in America, you would probably discover that the white ones were favoured – apparently something to do with white indicating cleanliness and purity in the mind of the average American consumer; or so I’m told.

There is a certain pleasure to be had from picking a freshly laid egg from the nest box, no matter what its colour, but when it comes to placing a softly boiled one onto the breakfast table, the fact that it is brown certainly adds to the attraction. However, is the colour of their eggs sufficient reason to choose a particular breed? I guess it might be!

Perhaps the most obvious choice for anyone looking for wonderfully dark brown eggs is the Marans breed. Well known and loved in Britain, they are still very popular in France, their country of origin and, for the real French enthusiast; the egg colour is probably the most important factor. In fact, some Marans aficionados over here will not breed from a pullet until she has laid several eggs and the colour proved to have remained consistent. 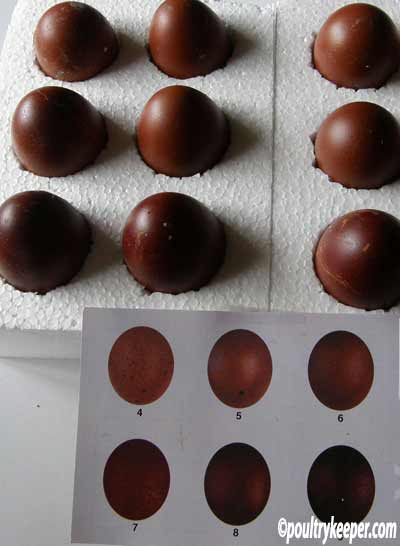 Another breed that lays a particularly dark, deep brown egg is the Welsummer, which originated in Holland. Their eggs are comparable to Marans, the only difference being that the shell of the Marans is glossy, whereas that of a Welsummer is matt. Both breeds lay well but, interestingly, according to those in the know, the darkest eggs often come from poor layers, while the better layers produce lighter coloured eggs. Therefore if a breeder selects hatching eggs that are deep chocolate in colour, he may be unwittingly also selecting for low egg production in the future.

Photo right: Dark brown Marans eggs and a card used for grading colour. Photo courtesy of DarkBrownEggs on our forum.

Although it is obviously related to genetics, the breed alone does not guarantee a consistent supply of continually dark brown eggs. A male bird could hatch from a dark brown egg but may not have the genes to father pullets that produce dark brown eggs – it seems to be accepted by most that the father is the determining factor for the colour of eggs in the next generation. Egg shell colour is polygenic, meaning that there are a multiple of genes that affect the end result. The particular pigment that is responsible for creating a brown eggshell in the oviduct is a hemoglobin porphyrin, in effect, a blood product.

If, as the French Marans enthusiasts do, one wishes to breed specifically in order to create the deepest possible brown egg, the basic way is to breed from birds that lay the darkest eggs over the longest period. Such a project may take a great deal of time and could result in keeping more stock than one would normally wish in order to ensure that you are only ever breeding from those that consistently lay the darkest of eggs. But, unless you are committed to showing eggs: provided that one is doing all one can to ensure that good-sized eggs are being hatched; that their colours are as defined by the breed standard and come from hens that are producing the numbers of eggs expected from examples of the particular breed in question, is the depth of colour so very important – it is, after all, the contents of the shell that we eat and not the shell itself. Food for thought perhaps?!