Why is my Cockerel White?

My first flock of hens were some Warren Browns, and were essentially spent stock from a local egg producer. My first cockerel was a traditionally coloured farmyard fowl that was somewhere in between large fowl and bantam in size, but after getting no results with fertility we opted to try a different route.

My uncle had bought me 2 Light Sussex hens from Walton in Liverpool, and these to me were just magic. So we managed to obtain a Light Sussex cockerel and hatched 6 chicks out of 42 eggs. The flock consisted of a good 20 Warrens as well as the 2 Light Sussex females.

All chicks were yellow, to our delight, and they feathered up very convincingly like Light Sussex. So much so, in fact, that I assumed they must be pure, but what were the chances?

The next few chicks to hatch were all yellow, but I noticed that a good half of them feathered up all white without the striking black markings that contrast so well with the white body plumage, especially around the neck area.

So what had happened? Why had these white birds – lovely as they were – not inherited the markings of the Light Sussex. It wasn’t till a good 10 years later (when I was learning about plumage genetics) that I began to understand what had happened…

The Light Sussex male had 2 copies (both available copies) of the Silver gene, so was ‘pure’ for Silver. This meant that each of his offspring, male or female, would inherit one copy of this gene. And since this gene is dominant to Gold, it shows quite prominently when the fowl in question has just a single copy of the gene. Also, the Warren Browns are very similar to Light Sussex in their genetics – i.e carrying the genes that extend colour into the breast and over most of the body (except neck, wings and tail).

Given this knowledge, it can be reasonably deduced that the chances of all 6 chicks from the first hatch being pure Light Sussex were fairly slim, and rather that the dominant genes of the father were showing through – despite their mothers (likely) being Warren Browns.

So how come solid white birds emerged from the same cross? Have you ever noticed that Warren Browns have white markings where the Light Sussex has black markings? This is caused by a gene called dominant white, which changes the colour of the feather from black to white. We know from their very presence that they are a cross, so unlikely to be carrying this gene purely, so it was most likely just chance that the first 6 chicks didn’t inherit this gene, whereas clearly a few of the next batch did. Of course, one of their mum’s could have been pure Light Sussex, but not all 6. 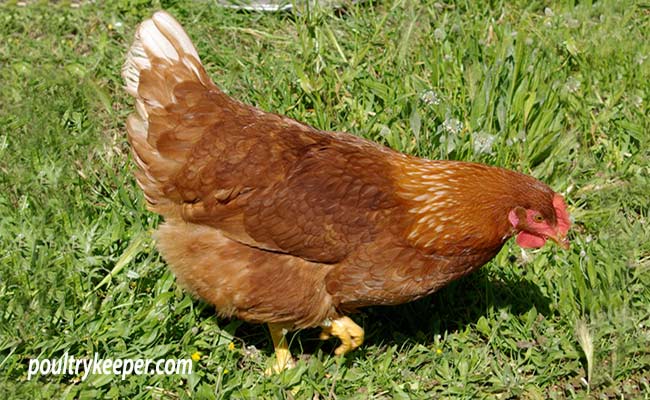 A Warren Brown. She has a copy of the cominant white gene

To sum up, a Light Sussex male has the gene to turn red feathers white, and the Warren Brown has the gene to turn black pigment white. When the birds in the breeding pen involve each of these varieties, there is a 50% chance of producing completely white birds.
This is just one of the ways of arriving at a white plumage in poultry and you can read more about this in Poultry plumage: How it begins 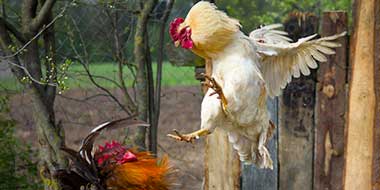 Information on assessing a cockerel’s temperament, which is especially important if you have young children.

Information on assessing a cockerel’s temperament, which is especially important if you have young children.