A common question I hear is ‘Can you feed ducklings chick crumbs’. The answer is yes, you can feed chick crumbs / growers pellets however, they must not be medicated. Ducklings and goslings should not be fed medicated feeds that are for chicks since they can die from some of the coccidiostats (drugs) that are used in the feed to prevent coccidiosis. 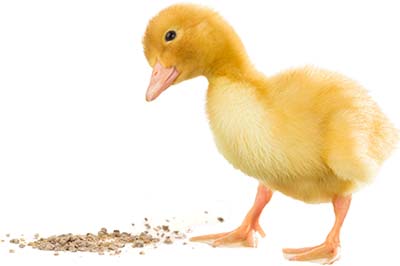 Ducklings will usually go wobbly and lose their feet if you feed medicated feed and risk becoming seriously ill or even die.

Some chick crumbs are medicated to try to prevent coccidiosis, a common disease that occurs in young chicks.

This can be identified on the white ingredients label that is often stitched to the top, or stuck on the back of the sack.

If feed is medicated with an Anti-Coccidiostat, it may say:

Crumbs and Growers pellets are available for Waterfowl but chick crumbs or poultry crumbs that are free of medication are suitable.

Allen & Page (who produce the ‘Smallholder Range’) sell specialist duck feeds however, I have had good results using Fancy Feeds chick crumbs which are unmedicated (and usually cheaper!)

You can buy Crumbs here. You only need them for 3-4 weeks so a 5Kg bag will usually be big enough for raising 10-15 ducklings.

Feed high protein crumbs until 3 weeks of age (4 weeks for Call ducks when they can handle the size of the grower pellets). Feeding Ducklings provides more information on what to feed and how to change over from crumb to pellets.