No-one expects the unexpected, there are potential dangers lurking in the most unexpected of places for the chicken keeper, says Jeremy Hobson.

I think it might have been a Monty Python sketch where it was once said “no-one expects the Spanish Inquisition.” Similarly, no chicken fancier can imagine all the pit-falls and problems that might occur whilst enjoying their hobby. Anticipating obvious problems and nipping them in the bud is one matter; thinking way beyond those is another subject entirely.

Amongst the most obvious is the need to shut your chickens in at night in order to prevent predation from foxes. A good wire fence will protect them during the day from wandering dogs and a regular worming programme will hopefully ensure that internal parasites are kept at bay. Periodic checks on the lice and red mite situation can be made by gently lifting one’s birds from the roost every so often and checking for any signs in between the feathers – especially under the wings and around the vent area.

The regular moving of small houses and pens onto fresh grass will help in preventing the area from becoming a quagmire and a breeding place for disease. Even vermin problems can be forestalled by the regular use of baiting points set in safe positions around the poultry area. 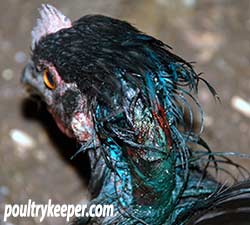 But what of the totally unexpected? Imagine the sadness that this particular (and, it must be stressed, extremely experienced and capable) poultry keeper must have felt in relating the following: “You spend months hatching, rearing and looking after your young stock. You clean the pen, let them acclimatise and recognise their new surroundings, then, after a few weeks, let them out to free-range the garden.

You come home one day only to find three of your potentially best pullets trapped and squashed between their run and the property perimeter fence. Two are dead with appalling head injuries and one looks as though it might not survive.”

Photo Above Right: An injury sustained from becoming trapped between the run and fence. This wound was treated with Teramicin and thankfully the bird made a full recovery.

It is perhaps, a small comfort to learn that the third bird did, with some serious ‘TLC’ survive, but the lesson to be learned from this is that one should, as far as is practicable, anticipate every possible problem before it occurs: difficult I know, especially when one considers that even experienced breeders of many decades occasionally encounter once in a lifetime mishaps. This is why, in whatever I write, I always advocate making friends with fellow poultry fanciers in your area (whether by joining a local club or simply leaning over the fence and chatting or joining a poultry forum). At least one of them will, during general conversation, happen to mention an incident from which we all can learn.

Avoid disasters such as the above by ensuring that any pens from which birds are allowed free range are at least a metre away from any boundary fence and never prop unused pen sections against the back of a garage or garden shed without first of all making sure that it doesn’t create a tunnel from which a bird, harassed by the unwanted attentions of a cockerel, for example, cannot escape.

If you happen to be breeding some light, potentially ‘flighty’ breeds, the young of which are still in a small pen in the garden, either with a broody or as a result of being artificially hatched, then the run will obviously need to be covered. Always use soft nylon netting for the ‘roof’ rather than hard and unforgiving wire mesh as the unexpected interest from a neighbour’s cat could cause the chicks to panic and scalp their heads on wire netting: whereas soft nylon might just save them from doing so. 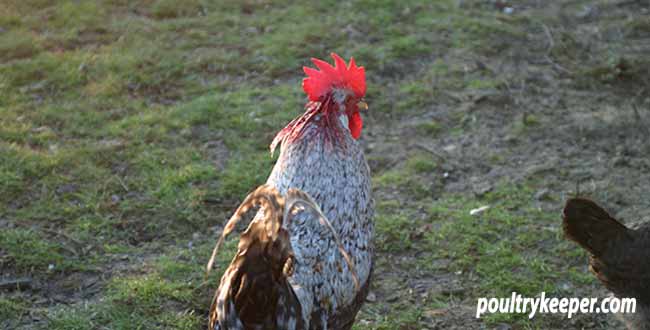 This cockerel might have been pecked but the wound suggested he had put his head through a hole in a fence and got the back of his comb trapped on the wire mesh.

Never, ever, leave short lengths of baler twine lying around. Baler twine is, it must be admitted, the ‘Farmer’s (and poultry-keeper’s) Friend’, but a few short stray pieces left in the grass are of enormous attraction to young chicks and they will pick at, and fray the strands until they can be swallowed; a process which could well cause impacted crops and is, therefore, potentially fatal.

As regards other unexpected ‘incidentals’; always round off the corners of a shed or brooding unit in which young chicks are being reared so that they cannot crowd in the corners and, if ducks are your choice, always use dull-emitters rather than infra-red lamps – ducklings have a tendency to splash water and should a splash hit the lamp, it will shatter causing an immediate heat loss and the ducklings to become chilled.

So, just before you think everything is okay, take a step back and look again: think about any potential pitfalls that might arise when keeping chickens. Prevention is certainly better than unexpected losses which could possibly have been avoided. 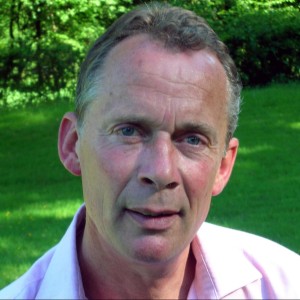 Jeremy Hobson is a freelance writer / author living in France. Jeremy has a number of books about poultry, his most recent being Success With Chickens.
All Posts »