Home » General Chickens » How to Clip a Chicken’s Wing

Clipping the wing of a chicken can stop her from flying which is sometimes essential to keep her safely confined behind a fence, away from predators or off your garden.

Before clipping a wing, you should first consider whether it is actually necessary. Heavy breeds such as Orpingtons can’t fly very well but lighter, Mediterranean breeds such as Leghorns can fly reasonably well though and some bantams can fly almost vertically.

If in doubt, (and assuming it is safe for them to get out), why not let your birds settle in to their enclosure and see whether they can get out? Remember with a clipped wing, it will also make it harder for them to fly away from any predators.

Once you decide to clip a wing (not both, you only want to unbalance the bird to prevent flight), hold the chicken firmly (you may find this easier with two people), check the quills of the feathers you are going to clip do not contain blood, they should be are white / clear. When feathers grow, they are full of blood and appear very dark / almost black inside the quill and should not be clipped.

How much to trim?

Note that many diagrams shown on websites are labelling the secondary feathers incorrectly. The Primaries are the 10 large flight feathers on the outer part of the wing when it is stretched out. The Secondaries are the next set of feathers nearest the body. The feathers that overlap these feathers are the Flight Coverts (not the secondaries as some sites suggest).

I like to divide wing clipping into 3 severities and you will see this being mixed up when looking at different diagrams and photos online. 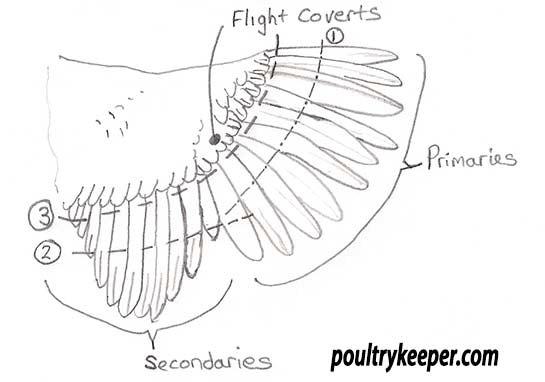 1. It is normally only necessary to shorten Primary Flight Feathers by 50% as shown by cutting along line 1 in the diagram. Lighter breeds or flighty hybrids may need a little more cutting off the primaries.

2.  If the bird can still fly, you may need 50% of the Secondaries trimmed too. This is shown as line 2 on the diagram.

3. Particularly flighty birds may need both primary and secondaries trimmed hard as shown in line 3 and described further down this page. This is quite extreme though, it is best to go in gentle stages if you can.

To make a neat job when trimming up to the flight coverts, as in 3, you can lift the flight coverts before cutting each primary feather so that the cut is hidden by the coverts afterwards. It is easier to wire cutter / nail clipper method described below though if you are clipping a lot off like this.

1. Clipping the primary feathers of a wing

So to recap, these are the important points for basic (primary flight feather) wing clipping :

Cut the primary flight feathers on one wing with sharp scissors. As a general rule, shorten them by about 50%. For determined flyers they will still manage to fly unless the wing is clipped a little harder.

The diagram shows the feathers to cut. Bantam breeds and light weight Hybrid Chickens are much more likely to fly and Guinea Fowl are very capable at flying into tall trees or onto the roof of your house!

If a 50% reduction in primary flight feather length to one wing doesn’t stop your chicken flying (or you’ve clipped both wings by mistake, don’t worry, it happens to a few people) then clipping the primaries harder, back to the flight coverts may be necessary.

Because the flight coverts get in the way and can end up getting trimmed which makes the wing look untidy, another way to cut the feathers, leaving the wing looking very neat afterwards is to bend the feather out and use a pair of sharp wire cutters.

This can be seen here on the young Guinea fowl in the photo. Guinea fowl are the ‘jump jets’ of the poultry world, they can fly almost vertically up to a good height so need a wing clipping as soon as possible to keep them on the ground. This Guinea fowl had a few growing primary feathers, still full of blood so only the primary feathers with clear / white quills were cut. 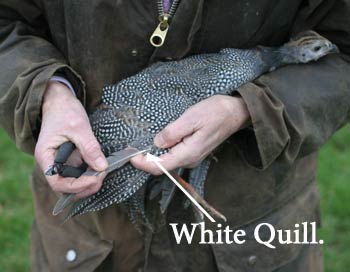 Hold the bird’s wing firmly and with your hand covering the bone (it helps to have an assistant), isolate the first primary and bend it up at 90 degrees about 1 inch from the bone. Cut the feather off with snips. The cut should not show and disappear beneath the flight coverts.

Continue down the wing for all 10 primaries and then smooth over the flight coverts and you have a clean look and no cut edges showing.

You actually don’t have to bend the feathers up when clipping the wing this way but it does make it easy to see whether each feather has any blood in it which shows that it is still growing.

For birds that can really fly well, you can also cut some of the secondary feathers too.

Again, the same rules apply, take it in gentle stages and check for growing feathers full of blood, shorted the feathers by about 50%.

3. Hard clipping both primaries and secondaries

The hardest clipping cuts primary and secondary feathers right back to the flight coverts.

The chicken in the photo below was getting out from a run regularly and the I was concerned about a fox that had been snooping around and would scare the bird into flight. The safest way to ensure her safety was to keep her on the ground inside the run. 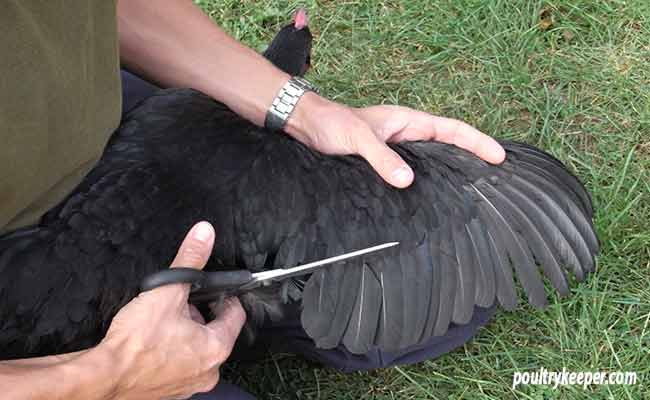 Both secondaries (above) and primaries (below) were clipped hard at the same time. 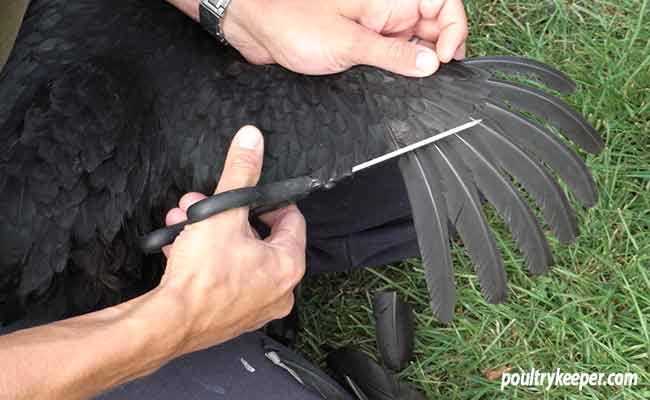 This does give the bird quite a harsh outline around the wing area as can be seen below so I only resort to clipping both primary and secondary feathers when absolutely necessary. If you clip only secondary feathers, you’ll find the primaries cover them when the wing is closed and the bird won’t usually look any different. 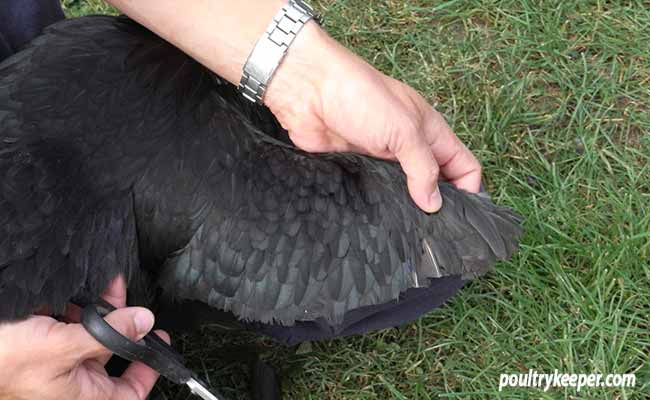 I’m pleased to say she did stay on the ground after this and Mr. Fox didn’t get a look in after an electric wire was installed around the outer perimeter. 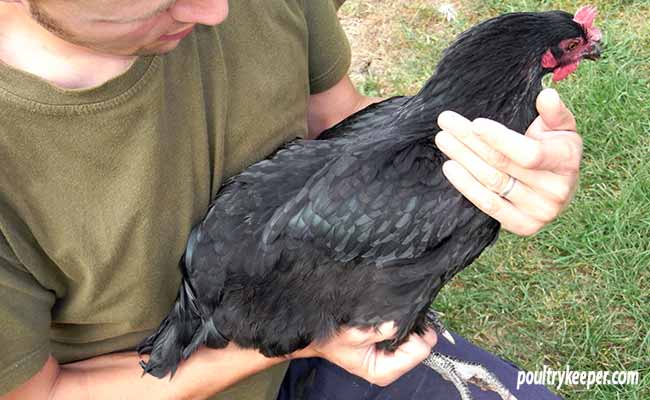 Clipping a chickens wing does not hurt her once the feather is fully grown. After a moult, feathers will regrow anyway so if you have gone a little too far, don’t worry too much.

Whilst this article concerns chickens, it is worth noting that Call Ducks can fly very well indeed and will often take off and fly away when moved to a new home. Always clip a wing to prevent them from doing this until they are settled.

So there it is, now you know how to clip a chicken’s wing. How did you find it? Is there anything else I should add? Feel free to leave me a comment below.

6 Responses to "How to Clip a Chicken’s Wing"