Ducks can carry worms, just like other poultry. Worming ducks (or de-worming as I think the correct term is) is not difficult using a suitable product and usually simply involves mixing in a given quantity with their normal food ration.

Many health problems can be avoided by worming twice a year. This is usually done after they have stopped breeding and again before they start laying, i.e. over the winter months since ducks will naturally find more earthworms during the wetter months and it is the earthworms that are the intermediate hosts, carrying the worm eggs.

Signs & symptoms of worms in ducks

Worms cause lots of damage to the digestive system which can sometimes lead to death but certainly leads to increased feed consumption, fewer eggs and loss of weight if nothing else. If ducks carry too many worms, you can have a situation where impaction occurs – this is where a blockage occurs and stops the digestive system from working, killing the bird. If a very high worm load is being carried by the duck and worms are killed, they can also release toxins into the body that kills the bird.

This article on Worming Poultry should be read in conjunction with this (there’s another link at the bottom of this article), but this article is intended to give some slightly more specific advice with regard to worming ducks.

It is proven beyond doubt that worm loads in birds that are kept in free range systems are far higher than birds kept in confined spaces. A classic sign of ducks having worms is that they will go off their legs or go lame. Duck faeces, containing worms are picked up by ducks dabbling and feeding and transferred to intermediate hosts (such as earthworms) in the soil. Ducks eat infected worms and the cycle is complete.

It is important to worm ducks but also to try to break this cycle through good management, resting ground when possible and keeping grass short so that sunlight kills worm eggs in droppings on the ground. If your birds are carrying a lot of worms or your ground is well used then it is a good idea to repeat the wormer dose since birds will pick up more eggs from the ground. Do this at an interval when the eggs will be hatching but before they reach sexual maturity. For most types of worms, 3 weeks is a good time to repeat this.

There are no products to my knowledge that are licensed for use with ducks in the UK. This is not to say there aren’t products available that will worm ducks!

Testing of veterinary products in order to get them licensed is both very time-consuming and very expensive. When there isn’t much of a market commercially for this sort of thing, companies won’t find any reasons to get their products licensed.

Vets (in the UK) can of course prescribe products they feel are suitable under their own ‘clinical judgement‘ and I think waterfowl breeders have passed on knowledge of the products they use for worming over the years.

Here are some of the most common wormers that I have heard vets are prescribing and are used by other waterfowl enthusiasts:

Flubenvet – There is no official dose for ducks. Most people will use the dosage given for Chickens and Geese. Note the dose rate will be different according to the pre-mixture you buy (one is stronger than the other) so check the label. If you are in any doubt, you should of course seek the advice of your vet.

Visit our page on Flubenvet here where we also provide links to sellers of this product.

Ivermectin – Has been prescribed to people by their vets for use on ducks. This is usually a ‘spot on’ product and it kills external parasites such as lice. Ivermectin is available in a small 10ml bottle which contains a dropper for easy application. The dosage rate for pigeons (remember it is unlicensed for ducks so no official dosage is given you will need to ask your vet for their advice) is 1 drop on the skin per 500g of bird weight weekly for 3 weeks. According to my books, Ivermectin will not kill tapeworm which is very rare in ducks.

Visit our page on Ivermectin here for further information.

Verm-X – This is a 100% natural product that many people are now using. I have been using this for the last couple of years in between using Flubenvet. For a confirmed case of worms, I would use a chemical wormer such as Flubenvet.

Read a review on Verm-X here. 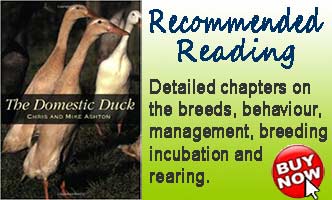