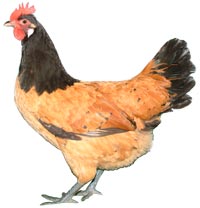 V orwerk chickens were developed in Hamburg, Germany by Oskar Vorwerk. In 1902 he set out to create a fowl that was more useful than the Lakenvelder, replacing the white with buff so it would not show the dirt and creating a bird for smallholders for utility: a bird that would provide a good number of eggs with a good feed to egg ratio as well as meat for the table when required.

The breeds used to develop the Vorwerk are thought to be the Lakenvelder, Utility Buff Orpington, Hittfeldern (now called Buff Ramelslohers in Germany), and the Andalusian. Oscar Vorwerk first exhibited his birds as new varieties in 1912 and by 1919 or a little earlier, they were well established and accepted by most breeders as an independent breed.

Vorwerk chickens first appeared in the UK as Buff Lakenvelders in 1935 where they were exhibited but it wasn’t until the 1970’s that they made a re-appearance.

Vorwerk and Lakenvelder Bantams at the Federation 2015. Owned by Jane Freeman and K. Freidl.

One Response to "Vorwerk Chickens"