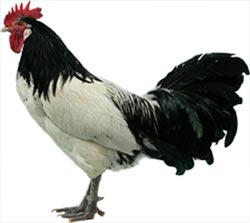 Uses: Rare breed. Utility – Layer. Eggs: 190-Tinted.
Origin: The Netherlands / Germany.
Weight: Cock: 2.25 – 2.7Kg. Hen: 2Kg.
Bantam: Cock: 680g. Hen: 510g
Colour: Black and White.
Useful to Know: A rare breed that is more popular in Germany and The Netherlands where they are called Lakenfelder with an ‘f’ and have slightly different standards to the UK and North America.
Photo: A Lakenvelder male owned by Ruth Dermot.

Lakenvelder chickens (called Lakenfelder in Germany) originate from the Utrecht area of The Netherlands and the Nordrhein-Westfalen area of Germany. Both regions follow a slightly different standard. They are thought to be a distant relative of the Brakel and Campine as well as some local rare breeds of the era. They were a popular breed during the first half of the 1800’s but were replaced by the more productive Barnevelder by the end of the century.

The Lakenvelder was first imported into England in 1901 and a British Lakenvelder club was formed a few years later but only survived until the First World War. British breeders tended to follow the Dutch colour standard so used the Lakenvelder spelling with a ‘v’.

Today, Lakenvelder chickens are taken care of by the Rare Poultry Society. There are only a handful of breeders and few entries are seen at poultry shows. They are still popular in Germany and The Netherlands where 70-80 entries can be seen at some of the large poultry shows.

Lakenvelders were exported to America from Britain somewhere around 1905 but it is thought there was never a club formed. They were admitted to the American Standard of Perfection in 1939 but are very rare today, with only a few appearing at shows from time to time.

A good number of Lakenvelders need to be reared to select a few with reasonable plumage patterns. Wait for youngsters to mature into their adult plumage before selection since juvenile plumage is not a reliable indicator of how they will look.

Lakenvelder Male owned by I. Kerwin