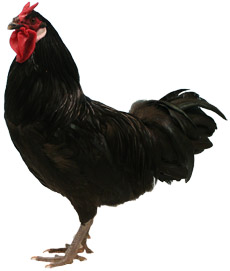 Uses: Exhibition, Rare breed conservation.
Origin: France. Eggs: 150 – 180 tinted.
Weight: Cock: 3.6 – 4.1Kg.Hen: 2.7 – 3.2Kg.
Bantam Cock: 1020g. Hen: 790g.
Colour: Glossy black with green reflections.
Useful to Know: A rare breed that has never been particularly popular in the U.K. The comb had two ‘spikes’ that look like the devil’s horns. Ear lobes are white and should not have entirely red ear lobes. Although there are some crests found on some La Flèche, according to the standard, this is a serious defect.
Photo: La Flèche owned by Peter Hayford.

La Flèche Chickens originated in France around the town of La Flèche which is located to the south of Paris in the Loire region. They were originally created to provide a tender white fleshed “Petit Poussin” chicken for the markets of Paris during the nineteenth century. Whilst they were produced commercially during this time, by the beginning of the 20th Century, they had almost died out and were only kept by a few small backyard keepers in small numbers. They grew too slowly for the farms to bother with them any more. A typical farm of the region would have kept their birds in a free range environment and the La Flèche would have taken 10 months to be ready for slaughter. 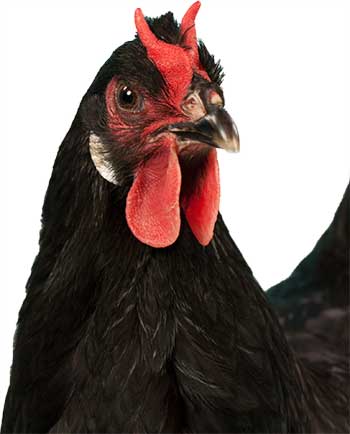 La Flèche are thought to be close relations of the Houdan and Crèvecœur. They have been a relatively popular breed in France and Germany through the 20th Century but only a handful existed in the UK until the Second World War when it is thought to have died out.

They are instantly recognisable with their two distinct ‘spikes’ for a comb.

In more recent times, La Flèche has been re-introduced from France and Germany and is getting more attention as breeders (and chefs) look for better taste from table birds in quests for ‘real food’.

La Flèche chickens entered the American Standard of Perfection in 1874.