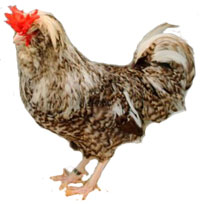 Houdan chickens are named after the French town of Houdan to the west of Paris. The Houdan was believed to have been created from the Poland, Crèvecœur and possibly the Dorking during the 1840’s. It was orignally created as a dual purpose utility breed and was particularly well known for its beautifully tender white meat. The Houdan is unusual in that it has 5 toes like the Dorking and V shaped comb with a small crest on its head.

Houdans had reached Britain around 1860 and America by 1865. The British and Americans exhibited the Houdan and they attracted a lot of attention as they were unusual in their looks, but their popularity never grew to more than a handful of breeders. 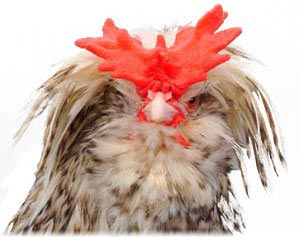 Despite their usefulness as utility breed, they never caught on commercially. In those days, force feeding rooms were set up in France and Southern England and table birds were very much an expensive, luxury product due to this labour intensive process.

Birds were taken to these rooms a few weeks before slaughter, caged, and force fed a few times per day. There is much written about their comb during this period between different groups of fanciers and the American Poultry Association changed their Standard to a ‘V’ shaped comb from ‘butterfly’ combs.

The Houdan was first admitted to the British Poultry Standards in 186? and the American Standandard of Perfection in 1874.