Currently UK law does not require ducks to be given access to bathing water. In fact the legal requirement is provision of nipple drinkers. However many duck producers in the UK provide plasson drinkers, troughs or in the case of one leading high quality supermarket farm, small ponds for bathing. The DEFRA Code Of Practice recommends that ducks be given a depth of water sufficient for them to be able to immerse their heads.

This has sparked heated debates between animal advocate agencies such as Viva! and commercial duck producers, as a result Defra and charitable trusts such as the Tubney Charitable Trust have invested hundreds of thousands of pounds backing scientific research into the requirements ducks have for bathing water. 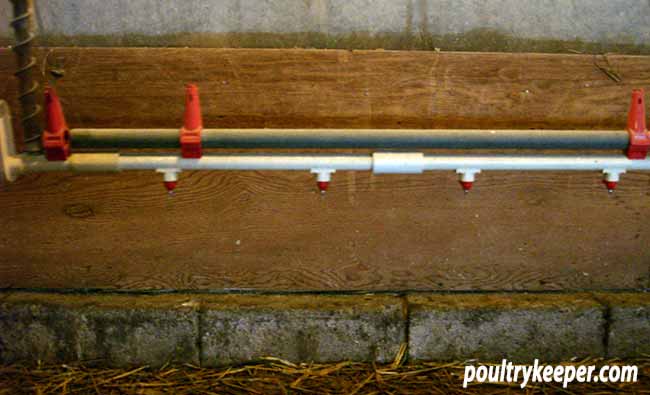 Providing nipple drinkers like this one, duck producers are within UK law. 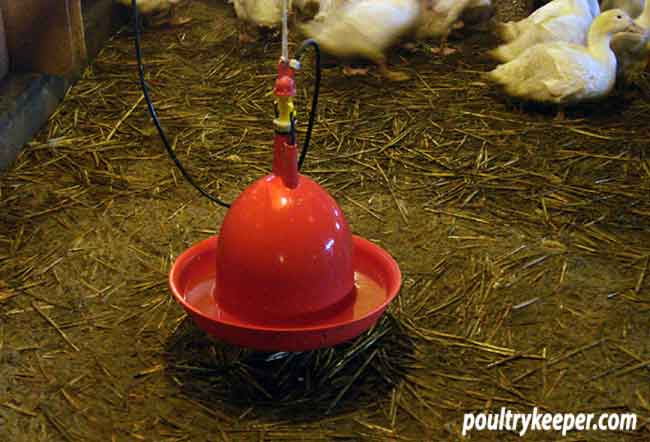 A Plasson Drinker used by many of the UK duck producers.

One such research project has recently been published stating that troughs and showers can be argued to improve duck welfare. Did all that money really need to be spent to come to that conclusion?

I am sure that all reading this would agree that ducks would indeed benefit from access to water deep enough to dip their heads and perform bathing behaviours, but if you take a step back and look at the issue objectively how does a duck really use water?

Any of you who have taken an interest in duck behaviour from day old until adult will be aware of how a duck changes it’s use of water as it matures. Ducklings love to splash around and dive to the bottom to feed, at this age they do not show advanced bathing repertoires, with much of their bathing action being limited to head dipping and body shaking.

This behaviour continues in the same vain through to adulthood and involves the duck dipping it’s head in the water, turning it to one side to ‘cup’ water in the hollow of it’s cheek then tossing the water over it’s back feathers while shuffling it’s wings, this is often performed in shallow water.

As the duck matures and is fully feathered the bathing repertoire evolves to include immersing itself in water and in some cases fully somersaulting, with the most elaborate behaviour being dive swimming under the water to fully immerse the feathers (although this looks more like they are just diving for fun, duck behaviour experts have concluded that at maturity this behaviour is actually elaborate bathing).

So what does this mean for the welfare of ducks that do not have water to bath or swim in? Well, the average ‘broiler’ duck lives to around 7-8 weeks, in fact it is actually still technically a duckling at slaughter age.

Commercial ducks are not considered to be ‘waterproof’ until they are around about 4-5 weeks as such even if they were allowed access to water deep enough to swim and bathe it would only be for 2-3 weeks of their lives, and even then, (as I have noted after studying hours and hours of video footage of commercial duck behaviour in relation to ponds) if the weather is wet and there are more interesting muddy puddles to be explored the ‘ducklings’ will pretty much ignore a pond. Which brings about another point that all the research that has ever been done on ducks and water seems to overlook, feeding behaviour. 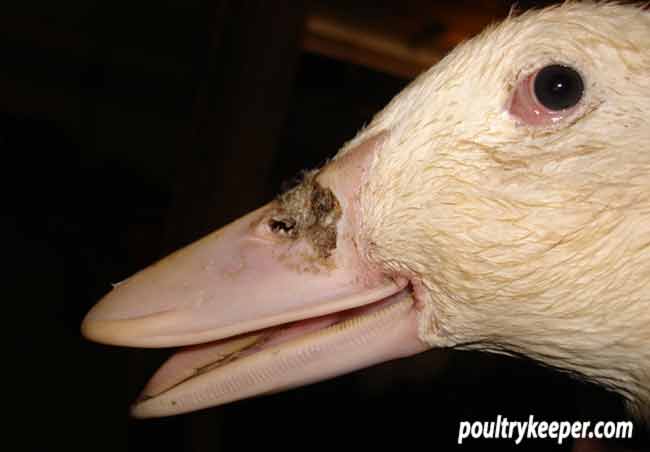 It’s clear to see the problems ducks face if they don’t have water to submerse their heads in.

In all the work that has been done to enrich farm animal’s lives, foraging comes top of the list of enrichment strategies. Yes ducks swim, but why do they swim? One of the main reasons is to forage, they are physiologically built to not only swim but their bills are elaborate filtration systems designed to sieve out tiny particles of food they find in water. I am pretty sure that if preference tests were carried out a duck would prefer to have water based feed enrichment rather than the opportunity to ‘swim’.

So yes, this would tally with the findings of the current research by Oxford University on behalf of DEFRA, that in the presence of water to dabble in, be it water from troughs or surface water as a result of showers, they are likely to be indifferent to ‘swimming’ opportunities.

There is still one important aspect of water usage that again has not yet been tackled in research, that of behaviour of sexually mature birds. It could be argued that these birds, or the ‘breeders’ are the ones that would most benefit from water baths. Not only do drakes use water in their elaborate mating displays, using it not only posturally but also as a visual aid spraying droplets from their bills whilst performing the head up tail up display. Further more, females benefit greatly from mating whilst on water from a physiological perspective, as the weight of a Cherry Valley Super M3 strain drake (which can be 5 kilos or above) is less of a burden on water than on hard ground.

So why not just provide all commercially farmed ducks with troughs? Ask industry experts and they all have different opinions. One point is agreed upon, from a food safety and animal health perspective any water provided for ducks must be potable. This is why nipple drinkers are so popular worldwide. Even though in nipple drinker systems research has shown that eye and bill heath suffers, producers may argue ‘better that than dead’. Anyone who has raised waterfowl knows that a bacterial infection can wipe out a flock mercilessly, and with multi age sites, as many commercial units are, this is a particular problem. 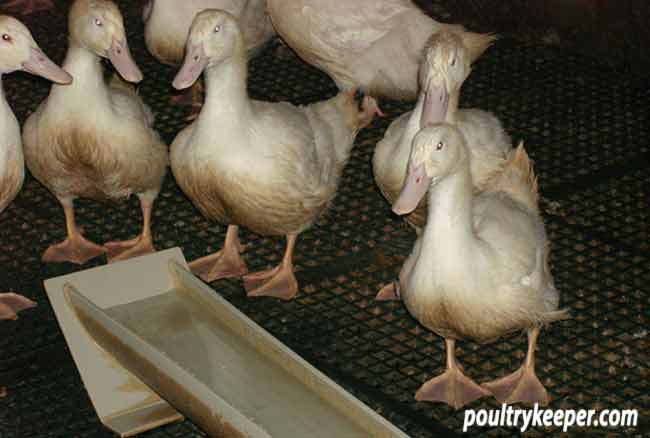 A water trough on a commercial duck farm where ducks can dip their heads.

From a veterinary perspective nipple drinkers provide the cleanest provision of water as such the safest in regard to general health. Access to troughs also increases litter moisture levels, which may in turn contribute to pododermatitis and mouldy litter, which can have serious disease consequences. Globally water is also becoming an expensive commodity and disposal of effluent is regulated by environmental laws.

So what about showers? Do they overcome these issues? From a farmers perspective it is unlikely. On the one hand yes, shower water would on delivery be potable and if delivered over grids then would not cause wet litter, but on the other hand as we all know the more water a duck has the more liquid it’s excreta, so you would likely to end up with a very messy shower area, grids or no grids. But would showers address the bird’s needs? Looking at the ways in which ducks use water for bathing and for feeding, it is hard to see how any of their behaviours would be accommodated by showers. In fact, birds observed in heavy rain will tuck their heads into their necks and try and avoid water droplets. Put your garden hose on shower and see how much your ducks like being showered!

From a commercial producers point of view every aspect has to be considered from bird welfare to financial viability. There is not point installing an all singing all dancing water delivery system that meets every behavioural requirement of the bird if it ends up costing to much to run, creates a waste management problem and potentially puts the birds at disease risk resulting in a massive loss for the producer.

So what is the answer? Many questions like this have been answered in an indirect manner by not putting bird welfare first. Although this may sound like it’s defeating the point it would be criminal to spend millions researching duck behavioural preferences then not be able to implement a system that was economically viable. Hundreds of thousands of pounds has already been spent with no change in production systems.

Approximately 18 million ducks were raised in 2006 for commercial meat alone, not considering layers. Out of this huge number, only one commercial farm who raises ducks for a leading high quality supermarket, provides their flocks with bathing water in the form of one 3 x 1 meter innovative flushable pond (as pictured below) per 4000 ducks (this is in addition to trough drinkers). However this is less than 1% of the ducks raised in the UK. 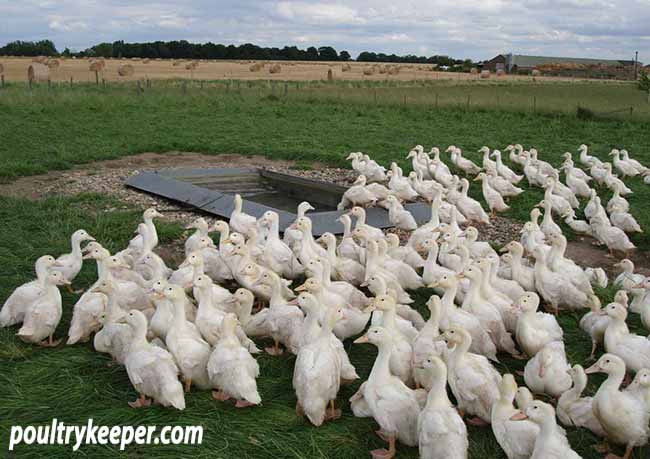 A commercial duck farm with a 3 x 1 meter flushable pond.

It would seem that from all the time taken and all the money spent there has not been an increase in welfare across the industry.

Maybe it is time to look at it from another perspective. It is clear from all the research that trough systems address behavioural needs in regard to broiler ducks (not considering breeder birds) as such would it not be pertinent to now take a mechanical engineering approach and put the funding that may be left toward developing a trough system that is not only environmentally sound, but that can be easily installed into existing housing systems and keep water potable and recyclable?

Sometimes removing the emotive aspect of a problem and looking at it purely from a logistical problem, the simplest solutions that benefit all parties may be produced. It begs the thought… has anyone approached any of the thousands of mechanical engineering students or universities to design such a system? Maybe they should.

Thoughts on this subject would be greatly appreciated.