When I was a small child back in the seventies we had a family eider down. It was a hand me (eider) down from my great grandparents. I loved the eider down, I used it whenever I was feeling poorly or cold in bed. It was a beautiful thing finished in silk with intricate embroidery. The only thing I wasn’t too keen on was that it made me sneeze, in fact it made the whole family sneeze, as did anything stuffed with feathers, including Francis Drake, our cheeky Khaki Campbell drake.

Not once did I ponder on the filling of the eider down. Even though the garden, (and sometimes kitchen), was home to ducks and geese, I doubt I even knew what an eider duck was. 40 years later and I am well educated in all things ‘duck’. The eider also happens to be my favourite species. I would like to think that the comforting old eider down was indeed stuffed with just that. However after the recent expose on the production of down, I have a nasty feeling that its’ filling may have been more sinister.

It would seem that authentic eider-down duvets are something of a rarity. Statistics on eider-down harvesting state that each year, roughly 3500 kg of hand picked eider down is produced worldwide with 3000 kg originating from Iceland (the rest from Canada). It takes approximately 1.2 kg of down to make one eider down duvet, meaning there can only be around 3000 authentic eider down duvets produced each year. Priced at £6000.00, it’s no wonder even the Queen is rumored to be swapping to duvets!

Eider down is harvested respectfully by Icelandic farmers from colonies of common eiders nesting on their land. The farmers remove the down from the nest leaving enough to keep the eggs warm. In return for these stolen treasures the farmers try to protect the nesting birds from predation, a peaceful, symbiotic relationship, between man and bird. Sadly the same cannot be said for commercial down production. 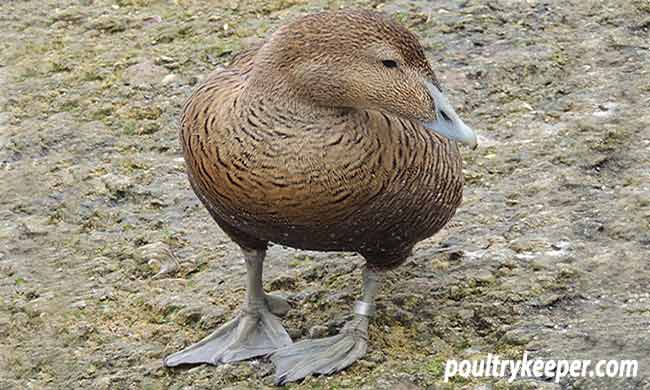 A Female Eider Duck. Photo courtesy of the author.

Being a duck enthusiast I thought I may one day treat myself to a trip to see the eiders at the Varanger Peninsula in arctic Norway, so I looked into buying myself a nice warm jacket. Being a bit choosy about where any animal based products originate from I decided to do some research into down jackets. I was horrified.  I assumed that any feather or down products, including coats, sleeping bags, bedding etc would be filled with feathers that were a by-product of the meat industry, something that would otherwise be wasted. I assumed wrong. The truth was far more sinister it was in fact, so horrendous that I could barely believe it was legal.

The down production industry is something out of my worst nightmares. It seemed at the time I was not the only one looking into this, as reports into the industry started to appear in the national news. 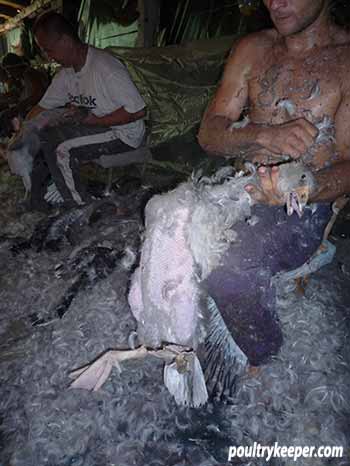 Down is mostly produced in China, Hungary, Ukraine and Poland. It is almost impossible to accurately state figures but reports state that up to 50-80% of the worlds down production has come from live plucked birds or birds used for foie gras production, which is also considered to be one of the most abhorrent acts of cruelty known to man.

Live plucking is exactly as it sounds. The feathers are plucked while the birds are restrained, tearing of the skin is commonplace and at no point is there any pain medication given to the birds. How comforting does your feather filled bedding seem now?

So, I thought, surely this cannot be legal? Technically it isn’t in Europe, however loopholes in legislation still allow the practice of ‘live harvesting’ where producers claim to harvest down from birds that are going through their moult period.

Parent flocks are more at risk from this as they are only used for laying eggs during the winter, so harvesting down is a way to make more revenue per animal. Sadly however, in China, live plucking is widespread and legal. 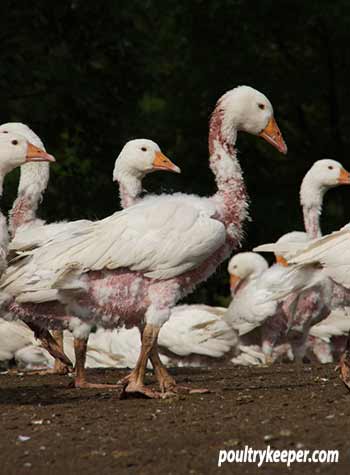 My first thought after discovering this horrific information was that it must be a small percentage of the industry tolerating these production methods and that surely the bigger more seemingly ethical brands making down and feather coats, sleeping bags and bedding would not tolerate this kind of cruelty, so I contacted various companies to enquire where they sourced their down and feathers.

Image Right: My geese certainly don’t look like this during a ‘natural’ moult. (Image courtesy of Four Paws).

Not one company could tell me where their down was sourced or how it was produced. A couple of brands were aware of the issues surrounding down and feather production as it had been bought to their attention by the international animal welfare charity Four Paws. In effect this meant that if I bought a product containing down or feathers, there was no way of knowing if the product came from live plucked or force-fed ducks and geese.

Thankfully, due to the work of Four Paws, a few brands and producers have been working together to set up system whereby the down and feathers in their products can be transparently traced. The Responsible Down Standard and the Global Traceable Down Standard (GTDS) were launched in 2015 and fully traceable down filled products are now available from a limited number of companies.

Naturally I wanted to find out more about these ‘standards’ and the brands that have signed up to them. I have some friends with what you can call ‘interesting’ jobs and as luck would have it, one happens to be an inspector for the Global Traceable Down Standard certification scheme. Naturally I grilled said friend and I am pleased to report that some headway is being made in the down production business with the GTDS in place.

Certification from The GTDS (which seems to be the most thorough of the two current schemes) ensures that brand manufacturers can acquire fully traceable down and feathers. While the important issues such as no-live plucking and no force feeding are prioritized, the scheme inspection also ensures that good practice is emphasized at every point in the supply chain ensuring full compliance with relevant animal welfare legislation. This in itself is big step forward in what has in the past something of a ‘hidden’ industry.

The GTDS inspection process goes right back to parent farms. The parent flocks lay the eggs, which will then become meat birds from which down and feathers are harvested after slaughter.  As previously mentioned, the parent flocks live much longer than their offspring and these are the ones that in non GTDS certified farms can be exploited for their down during non productive periods, with down being ‘harvested’ up to 3 times a year.

Which brands can you trust?

It isn’t all positive news though as at the time of writing, only a handful of brands have signed up to these standards so far, but it is a very new scheme and hopefully more and more brands will get on board, hopefully including bedding and furnishing brands.

So what if you are really desperate for a down jacket? Your safest bet at present is to buy from Patagonia or The North Face. Better still buy clothing made using Primaloft, a synthetic down replacement that, according to my lunatic friends who climb ice covered mountains, actually performs far better than down, especially in damp conditions.

Sadly bedding and furnishing manufacturers are still not quite there in terms of tracability, so at present you still cant be sure if the down and feathers you could be lounging on are not from live plucked or foie gras ducks and geese…… that is unless you have a spent £6000.00 for an authentic eider down or you have harvested the filling from your own flock of eider ducks!*

*I realise there will be eider duck owners reading this wondering how long it will take them to gather enough down for a decent bedspread.