The very mention of the words Avian Influenza (AI) or Bird Flu strikes fear into the hearts of poultry keepers and the general public alike. 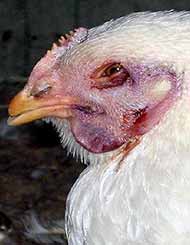 Avian Influenza is caused by an Influenza virus of which there are several strains. Some of these strains infect only people, others only birds and some only pigs. However some strains have the ability to infect more than one species however they usually have a preference for infecting one species. E.g. A strain of Influenza that infects birds may readily spread between poultry but may struggle to infect people and will only do so in rare circumstances. Why human health professionals become concerned about bird flu is that if there ever was a strain that could readily infect both people and birds, it would be a challenge to control.

Not only do different strains vary in terms of which species they prefer to infect they also differ in the levels of harm they do to affected birds. As such AI is split into two groups: High pathogenic AI (highly harmful) and Low Pathogenic AI (less harmful). Unfortunately as with all things in nature AI doesn’t fit nicely into boxes and all strains lie on a sliding scale where at one end the viral strain is so harmful affected birds are often found dead, through to a relatively harmless strain where the birds have a mild sneeze. Only the Veterinary Laboratories Agency (VLA) can determine whether or not a given strain is classed as high or low pathogenic.

The virus is often carried and spread by waterfowl who are remarkably resistant to disease and rarely show clinical signs. Because waterfowl often migrate large distances globally AI can move between countries readily. Furthermore both people and contaminated objects can carry the virus long distances.

Affected birds shed the virus in both their faeces and nasal discharge. Then other birds and perhaps mammals can pick the virus up by either inhaling or ingesting it. Once infected, birds can show clinical signs in as little as 24 hours.
Clinical signs include: sudden death, respiratory distress, swollen face, sneezing (snicking), runny nose, runny eyes and nervous signs. Unfortunately none of these signs are specific.

Diagnosis can only be made by a vet taking blood samples or swabs.

Unfortunately when AI is suspected then Animal Health (a government agency) must be informed since Avian Influenza is a notifiable disease even if it is Low Pathogenic AI. They will visit the farm and take samples. If your birds are positive for the virus then sadly they would have to be put to sleep. Then Animal Health/DEFRA would look at birds on surrounding holdings to check for disease. Local poultry keepers will also likely be advised to keep all poultry indoors. 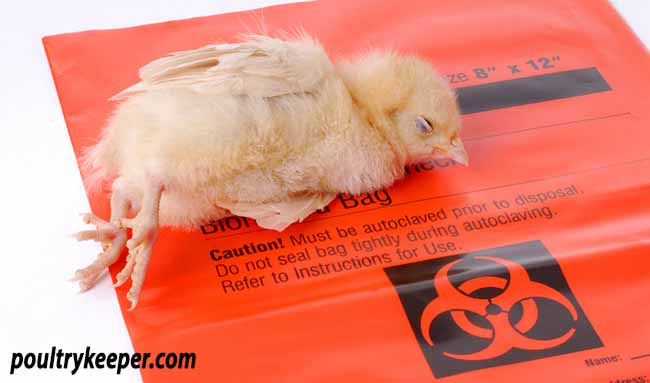 In these circumstances it is very tempting to keep your head down, say nothing and pretend that everything is ok. However not notifying Animal Health or DEFRA of suspected cases could allow for the spread of the disease across the country potentially leading to the deaths of millions of birds and in extreme circumstances you may be putting yourself and your family at risk.

Animal Health/DEFRA would use the GB Poultry Register to determine which holdings are near to a suspected outbreak. All poultry keepers with more than 50 birds are required to sign onto the register. Those with less than 50 birds are advised to do so, but it is not compulsory. Registration is free. Chicken Vet recommends that all poultry keepers sign onto the register.

Prevention of AI in your flock involves keeping wild birds away. Trees in ranges look nice, provide shelter and shade as well as encouraging ranging. However trees attract wild birds which can defecate on the range below possibly spreading AI. Feeding birds outside also attracts wild birds. Keepers of waterfowl should especially try to discourage wild birds from swimming in their ponds.

If Avian Influenza does reach the UK it is advisable to keep all poultry indoors as well as not visiting poultry sales and shows (though these should all be cancelled!). Whilst AI is easily spread it is not resistant to disinfectants or soap.

Many people ask about vaccination. However whilst there are vaccines available globally, there are several strains of AI, and therefore it is almost impossible to have one for every strain out there. To make matters worse Avian Influenza is constantly changing meaning that a given vaccine may be useless within weeks or months of being manufactured. There is also an argument out there stating that vaccinated birds may become infected with Avian Influenza but not show signs thus they would not be identified and spread the disease further.

Globally Avian Influenza is a problem mostly in the developing world rather than in the western world. Whilst DEFRA and Animal Heath do their best to keep the disease out (including annual random routine testing) it is always possible that with migrating birds the disease may make its way into the UK.

Poultry keepers are always advised to keep a look out for sudden death or severe respiratory signs in several birds in their flock. If you suspect Avian Influenza please contact DEFRA or Animal Health immediately.

We have a page on Bird Flu here that will track outbreaks in the UK
The following two tabs change content below.