Egg Peritonitis is when the peritoneum (the lining of the abdomen) becomes inflamed due to an infection from bacteria. Peritonitis can occur after prolapse or when yolk goes into the abdominal cavity, instead of going down the oviduct and out in the normal way.

The yolk should go into the ‘ovarian pocket’ (the space surrounding the ovary). This often occurs after some viral diseases like Infectious Bronchitis where the disease damages the reproductive tract. A ruptured intestine can also cause this problem. 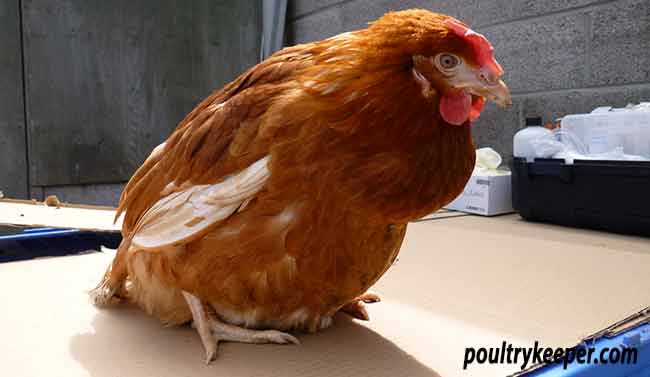 A chicken with egg peritonitis. Photo courtesy of Chickenvet.

Sometimes a ‘Penguin Stance’ can indicate an egg bound hen or peritonitis but more often than not they don’t show this and may just be swollen around the abdomen and it is often hard to diagnose this problem whilst the bird is alive. The bird can have a blue comb, and diarrhoea but no book seems to believe these are conclusive and can also indicate many other problems. A post mortem on birds will show an inflamed abdomen and there will be a very putrid smell with yolk. Some birds have been treated with antibiotics and had the fluid drawn off but the chances of success are slim and you can often have a big bill at the end of this. It is usually better to have the bird put to sleep.

Recently, vets have been experimenting with Suprelorin Implants to stop hens from laying for a while, giving them a chance to recover.