The Plight of the Battery Hen

For those of us that raise and nurture our own hens, the world of intensive chicken farming is a million miles away. But for the egg-buying public, many are blissfully unaware of the conditions the eggs they purchase were produced in. Skilful marketing and lack of proper labelling hide the horrible truth.

However, just a little research will unearth the facts about intensive chicken farming, which make very uncomfortable reading.

There are 50 billion chickens raised for meat and eggs worldwide, the vast majority of these being in intensive cages. Over two-thirds of eggs produced in the EU are from intensive barren cages and in the UK alone, there are 16 million laying hens living in barren battery cages. The British Hen Welfare Trust has just celebrated rescuing its 250,000th lucky hen (her name is Kate) which is a magnificent achievement. But what about the millions of hens that aren’t rescued?

A battery hen’s life consists of sharing a barren battery cage with 4-5 other hens. Each hen has less room than an A4 piece of paper to stand up in. And a battery hen is surprisingly large.

The height of the cage just about allows the chickens to stand up, but certainly not stretch upwards or outwards. As a chicken’s wing span is the equivalent of 4 sheets of A4, she will never be able to stretch her wings, let alone flap them. The wire cages are stacked on top of each other in a temperature controlled large room that has no fresh air or sunlight. The rooms are lit artificially for up to 18 hours a day to maximise egg production. Our little battery hen will never feel the sun on her back.

The cage floor slopes at an angle of about 12 degrees which makes egg collection easy but is extremely uncomfortable for the chicken to stand on, particularly with the wire cutting into her feet. A chicken’s natural behaviour is to scratch for food, in the wild she would spend much of her time foraging. She would also preen herself and take dustbaths. In these cages all she can do is stand. There are no perches to perch on and no nesting materials for her to lay her egg in. Laying an egg is a daily occurrence and she will try desperately to nest on the floor to lay her egg, something that is impossible in these cramped cages.

A small glimmer of hope

There is, however, a (very) small glimmer of hope. In 1999, the Council of the European Union declared that battery cages were so cruel they were to be banned. The ban however was not to come into place until 2012, and it only banned barren cages, not enriched cages. However, despite having 10 years to prepare for this miniscule step, some countries, most notably Poland, are dragging their feet trying to postpone the ban. Charities are currently campaigning to raise awareness of this ban and muster the support of the public as well as that of MPs. It is imperative that this ban comes into force in 2012 as it is a small but significant step towards acknowledging the plight of our battery hens.

So, is the ban on battery cages the answer to all our prayers? Will chickens throughout the EU be free ranging?
Absolutely not.
Enriched cages (a contradiction in terms if ever I heard one) will still be legal and are far from ideal offering little more than the barren cages. They do, however, take into account a chicken’s basic requirements to nest, perch, scratch and dustbath.

The size requirement in the new enriched cage is 750cm2 per chicken. In other words imagine that A4 bit of paper that is the size of the room per chicken in the intensive cage and add a postcard-sized space per chicken.
Not huge is it? Our chicken will still not be able to flap her wings or move around easily.

Taking in consideration our chicken’s need to scratch, there will be material available and also somewhere for her to dustbath. There will also be a perch and a ‘nest’ for her to lay her eggs in.

The not so good points

There is only one nest box per cage and minimal material to nest in. A major worry here is that dominant hens, being in such a confined space, will restrict hens further down the pecking order from ever accessing these ‘facilities.’

Despite their newly found ‘space’ the chickens will still be in a confined cage with very little to distract them. Boredom can lead to aggression, especially with their new ‘facilities’ to fight over. To prevent serious injury, the hens will still routinely have their beaks trimmed, without anaesthetic. And it’s not like us cutting our nails, ‘beak trimming’ is a convenient farming euphemism as the beak has many nerves in it. This process was described by the Farm Animal Welfare Council as nothing short of ‘mutilation.’

Trimming by hot blade has been banned in the UK and only infrared beak trimming is allowed, which whilst marginally less barbaric, is still acutely painful for the chickens. Hens who have had their beaks trimmed may have problems eating in later life, if they get that far of course.

Aggression can lead further and ultimately to hens being pecked to death by their cage mates and even more horrifically, eaten by them. One study showed that as many as one caged hen in 30 is subjected to this fate.

Male chicks, who are surplus to requirements in the egg-laying industry, will still be killed soon after birth. This happens regardless of the farming system they are being raised in. The lucky ones are gassed, the not so lucky ones are fed along a conveyor belt, whilst still alive, into a mincer.

Despite their new ‘enriched’ status, hens will still be shipped off to the slaughterhouse once their financially viable laying life is over. They will still be hung up by their legs in shackles and dipped into an electrified water bath. This supposedly stuns them prior to having their throats cut. However, due to the fact some of these chickens are tiny or struggling for fear of their lives, the stun bath doesn’t always work and they may be alive when their throats are cut. As the blood drains from them, their blood pressure drops, instilling a sense of panic.

It is also worth adding that this horrific death is endured by the vast majority of chickens, even commercial free range ones.

It is a sorry, undignified end for these hard-working ladies who deserve so much more. Every battery hen who is re-homed is saved from this fate, so if you can possibly offer a home to some of these girls, please do. Quite simply you will be saving their lives. 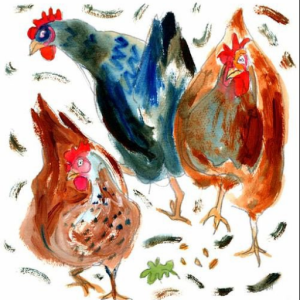 Jo lives in Cornwall and is completely batty about her ex-battery hens. She is a passionate campaigner, helping out with rescues and highlighting their plight in her articles.
All Posts »

The Life of a Battery Hen

So what has life been like for the hens you re-home? Well, we have all heard about the dreaded battery

A Day in the Life of a BHWT Rescue Coordinator

The British Hen Welfare Trust has rescued and re-homed over 120’000 ex-battery hens (as of January 2009), that is hens

Considering what they have been through, ex-battery hens don’t usually have too many health problems. Battery hens are vaccinated against

Black crossed to white? A common question in relation to breeding is: what will be the outcome of crossing a black to 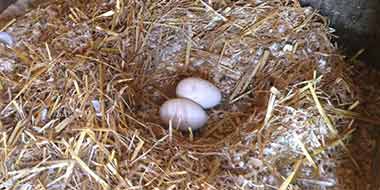 How Do You Know if a Goose is Ready to Incubate Her Eggs?

A goose will build a nest and start laying eggs. The question is, should you remove them? Or wait for her to lay more? And how do you know when a goose is ready to incubate her eggs? 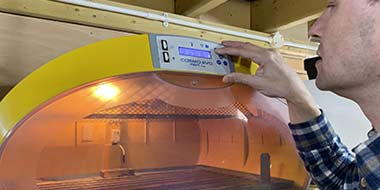 Setting Up Your Incubator

Success using an incubator isn’t guaranteed, especially with some of the cheaper models available. Getting good results at hatch time 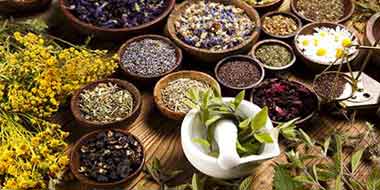 Jeremy Hobson, the author of Success With Chickens, tries to uncover the truth behind some long-held chicken health myths and potions used as natural remedies.