In the U.K. we have the well-known Eurasian magpie. This is a very distinctive black and white bird that comes from the Corvidae family. Unfortunately, they are trouble for poultry keepers! Magpies can kill chicks and young birds but magpies can steal or eat eggs from nest boxes inside chicken houses as well when you’re not around.

The magpie is smart, in fact, they are considered one of the most intelligent animals in the world and the only non-mammal to be able to recognise itself in a mirror, so no wonder they have figured out how to get a nutritious meal our of our nest boxes!

Magpies also have amazing eyesight. If you see a magpie in the garden, and approach the window, they will normally see you and fly off, so this makes them hard to shoot if you have one stealing your eggs and are that way inclined.

A drop in egg numbers

Between a couple of magpies, feeding their young, you can lose anything up to a dozen eggs per day as I found out first-hand myself. At first, I thought there had been a fall in the number of eggs my hens were laying and I couldn’t really explain it. It was May when my hens were usually producing lots of eggs, however it soon became clear that something was taking eggs from the nest boxes . I found some empty egg shells in the fields next to my chicken runs and then, I found a broken egg in the coop.

I had purchased a Trail Camera on Amazon for recording some of the local wildlife, including foxes that were coming up to the fence of my poultry run during the night, so I set this up inside a chicken coop to catch the culprit in the act!

As you can see in the first few seconds, our black and white thief was popping into the coop and stealing bantam sized eggs, carrying them out. The other eggs were bigger and although he managed to carry a few off, he was breaking a hole in the larger eggs and eating the contents in the nest boxes as you see during his next visits towards the end of the clip.

How to stop a magpies stealing or eating eggs

Firstly, the obvious solution: collect eggs regularly through the day and don’t leave eggs around outside while performing your chores (it’s easy to forget them and unintentionally attract a magpie or crow).

The less eggs left lying around in nest boxes, the less there are for a magpie and if he doesn’t find eggs, he will eventually give up.

Easier said than done though if your hens lay throughout the day or you aren’t at home during the day… so maybe there are more drastic methods required.

[note style=”warn” show_icon=”true”]Warning: the methods described below are not to everyone’s taste and involve dispatching the magpie. Please navigate away from this page if you aren’t comfortable with this sort of thing.[/note]

Whilst it’s not everyone’s desired method, if you can shoot a magpie, it will certainly solve the egg theft problem straight away. Despite their appearance of being quite a large bird, underneath their feathers, they actually have quite a small body. An air rifle is adequate to kill them humanely.

The choice of air rifle is outside the scope of this article but to get a humane kill, I chose a .22 Calibre legal powered air rifle that was powered by pumping it up with compressed air and use hunting pellets that I bought via Amazon.

Like all bullets, air rifle pellets have a curved trajectory between the end of the rifle and the target. The further away you go from the target, the more ‘drop’ of the pellet you will see on the target. It is essential to adjust your sights or rifle scope before hand by using a suitable paper target.

I have a ‘kill range’ of about 30 yards, so my rifle is calibrated to hit a target in the centre of the crosshairs at this range. Beyond this, the pellet drops quite dramatically and is more likely to miss or clip the target, so I don’t attempt shots greater than this.

If you have an upstairs window in your house about 20 to 30 yards away from where you often see the magpie and it has a safe backdrop (the pellet must land safely if you miss) then this is often the best place to ‘zero’ your rifle.

Because of their great eyesight, I leave the window open enough to shoot from. When the magpie turns away or goes behind a tree, you can raise the rifle, carefully pointing it out of the window but be warned, they often spot you and fly off!

The Larsen trap is a humane trap. It consists of three cages side by side. You place a decoy (dummy bird) and some bait (like an egg or some roadkill) in the middle cage. The outer two cages have a sprung lid, propped open with a stick. The magpie enters the trap and lands on the stick (perch), tripping the trap. The lid snaps shut. 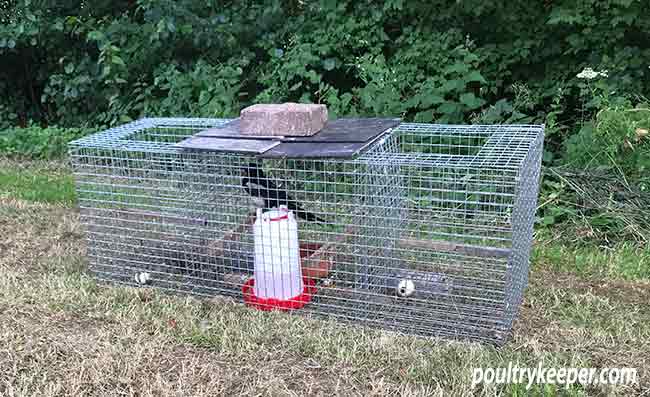 By far the best decoy is a live magpie. A local farmer or other person using a Larsen trap can often give you one to get started or you have to keep trying with your plastic decoy.

They will ‘chatter’ when another magpie is close which will draw them in.

Once you catch the next bird, you can dispose of the decoy bird and replace him with the new catch.

You must provide food (I use some pellets and wheat in a heavy bowl), water, a perch and shade for the decoy bird. I would suggest you are discreet about where you set the trap.

There are a lot of people who understandably don’t like to see a bird in a cage. Personally, I hate it as well. Forgetting chicken eggs, I think about how many young birds and eggs in nests magpies steal in the wild. They are the ornithological version of the ‘child catcher’, so for me, it’s worthwhile if done humanely.

I caught 10 magpies in a row using this method. I kept the last one (fed and watered) no longer than a week. He had plenty of corn, layers pellets, eggs and other roadkill goodies during this time. I think it was a good way to end his days!

You must check the trap regularly of course. I keep the trap in view of the house so I can quickly see when it’s triggered.

One final tip is to try different locations for the trap. I found you could move it just 10 yards and it would start catching.

Do you have other methods to stop magpies stealing eggs? Please let me know in the comments below.