We all look forward to spring (I know I certainly do!) More light, more eggs and the best time for fertility and breeding but lets face it, even the local Sparrow population is laying during the spring, so your hens should be laying now (earning their keep I say), as nature intended. Even if you are keeping some rather fancy fowls that don’t lay so many eggs, they should be at the peak of their production in the spring time. 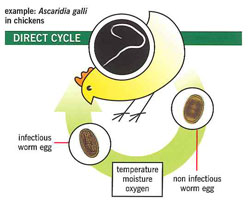 There is something else going on at this time of year though, something most of us would rather not think about when we have fit and healthy birds and thoughts of how many eggs are going to hatch in our incubator.

In the commercial sector, this has been called “The Spring Rise” which is when poultry worms start to increase in numbers as the temperature holds above 10°C. This increased ‘infection pressure’ from worms can cause your birds to become ill as their worm burden dramatically increases.

So, warm, humid spring days are perfect for worm eggs to mature and be picked up either directly by your hens or indirectly via an intermediate host such as earth worms eaten by your hens. 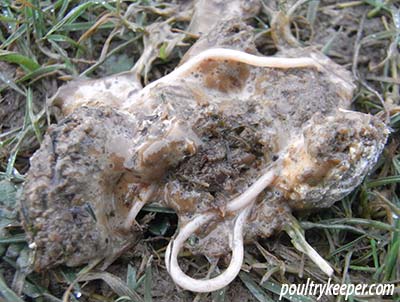 The three main worms that cause problems in chickens are Roundworms, Hairworms and Caecal worms and I’ll spare you the Latin names but all 3 can cause quite a bit of damage to your chickens given their small size.

The first, Roundworms are the most common and thankfully are the biggest so are usually spotted in faeces. They are white in colour and can grow up to two inches.

The second main worm, Hairworms are, as the name suggests, incredibly thin and are barely visible to the naked eye.

The last, Caecal worms live in the lower end of the gut and commonly cause no obvious harm. They can however carry a parasite called Histomonas which is the cause of Blackhead, a big worry if you keep Turkeys. It’s for this reason that it’s not advisable to keep chickens on the same ground as Turkeys although it can be done if you follow a strict worming regime.

The good news is worm eggs are destroyed by prolonged and deep frost in the winter and drought in the summer (ok so we don’t get drought very often in the UK) but the thing that does help us is the direct Ultra Violet Radiation – the sunshine!

If you keep grass trimmed short and allow the sunlight to get to droppings, this will certainly help. The photo above shows two of my field runs on a frosty morning.


Our page on worming chickens has some photos of worms that can sometimes be seen in chicken droppings and offers guidance to the signs and symptoms of worm infestation.
If you haven’t wormed your chickens by the start of spring, it’s a good idea to consider doing so because worm eggs that are deposited in droppings by the thousand can now start to mature.

The only licensed in feed wormer (in the UK) is Flubenvet and is very simple to use if you use the blue scoop that comes in the pack to mix up 2Kg of food per scoop. A pack can treat around 20 average sized hens and has a long shelf. An alternative to this that’s even easier is to use a sack of pre-mixed feed containing Flubenvet.

Why not read our page on worming chickens and other poultry here. There is also a separate article on worming ducks here.

Have you noticed chickens with worms in the spring? Please leave me a comment below.